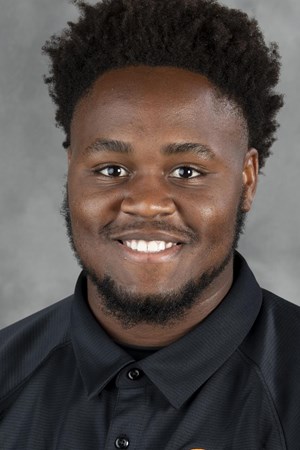 Cromartie, a 6-4, 325-pound senior, anchored the Camel defensive line from his nose guard position and recorded 3 tackles and a quarterback hurry in the first half as Campbell limited the Eagles to 141 yards and built a 13-6 lead.

The Camel lead grew to 20-6 early in the second half, but the Eagles battled back and eventually tied the score 20-20 on a 9-yard scoring drive after a fumbled snap by the Campbell punter.

The Eagles went up 27-20 on quarterback Shai Werts’ 41-yard touchdown run with 6:42 left in the game.  Quarterback Hajj-Malik Williams threw a 20-yard touchdown pass to Jalen Kelsey with 14 seconds left to cap a Camel scoring drive that trimmed the margin to 27-26.

Campbell Coach Mike Minter elected to go for the 2-point conversion and the win, but the pass sailed incomplete. A missed extra point in the first-half also proved costly.

It was the season-opener for the Camels who will travel to Coastal Carolina Friday night for a 7 p.m. game.