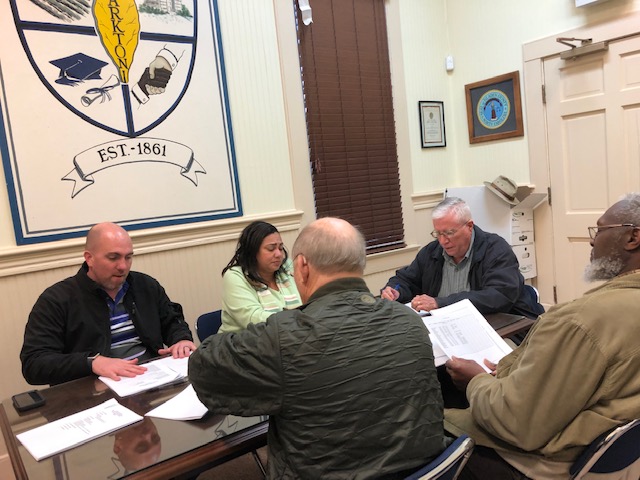 Clarkton resident Linda Croom addressed the board on Tuesday and asked if she could remove the rose bushes currently planted there.

“The roses are not doing well,” said Croom. She added she had tried placing new roses at the sign but they too were not doing well.  She offered to replace the roses with flowers instead.

The board voted unanimously to approve the change.

In other business, the board heard from Town Clerk Kentrina Woods regarding the utility account for Jamie Smith. She updated the board that since the meeting, Smith came by the town office and offered to pay $150 on his past due bill and to pay the rest on a contract.

Woods said she contacted Mayor Arthur Whedbee who approved her to accept the $150 payment and set up a contract to pay the remainder.

“He (Smith) hasn’t been back since February 8,” said Woods.

She also told the board that Smith had dropped an incomplete check in the night drop off box. The check was signed but did not have the amount completed.

In February, the board voted to shut off the water due to the high bills and the fact the account is past due by several months. It was learned in that meeting that the water meter was located behind a fence making it difficult to access. The board instructed Hall to move the water meter.

Hall told the board that following February’s board meeting he did obtain permission from Smith to move the water meter outside of the fence on the property. Hall also told the board he notified that he has a large leak or possibly more than one leak.

Hall told the board on Tuesday that meter has now been moved outside of the fence and the suspected leak is still continuing. The board was told that 4,300 gallons of water went through the meter last month. Smith still has a balance of $1,900 that he owes on his account.

Woods told the board that Smith had told town staff to complete the check for the amount owed.

Town Attorney Cliff Hester siad, “No. I don’t think you can fill it in.”

The board voted unanimously to shut off the water.

Hall also updated the board regarding repairs to the town’s maintenance shop and to the public library building from Hurricane Florence. The new roof has been installed on both buildings.
The board approved the purchase of check valves and assemblies for the NC Highway 211 lift station and the replacement of the Cornell rotating assemblies at the town’s Wastewater Treatment Plant. Both items were damaged by Hurricane florence. Hall told the board this will allow the town to make the necessary repairs and to also have a spare assembly for each item. The board voted unanimously to approve the purchase.
The board met in closed session for 30 minutes to discuss a matter of client-attorney privilege.  No action was taken on the time in open session.