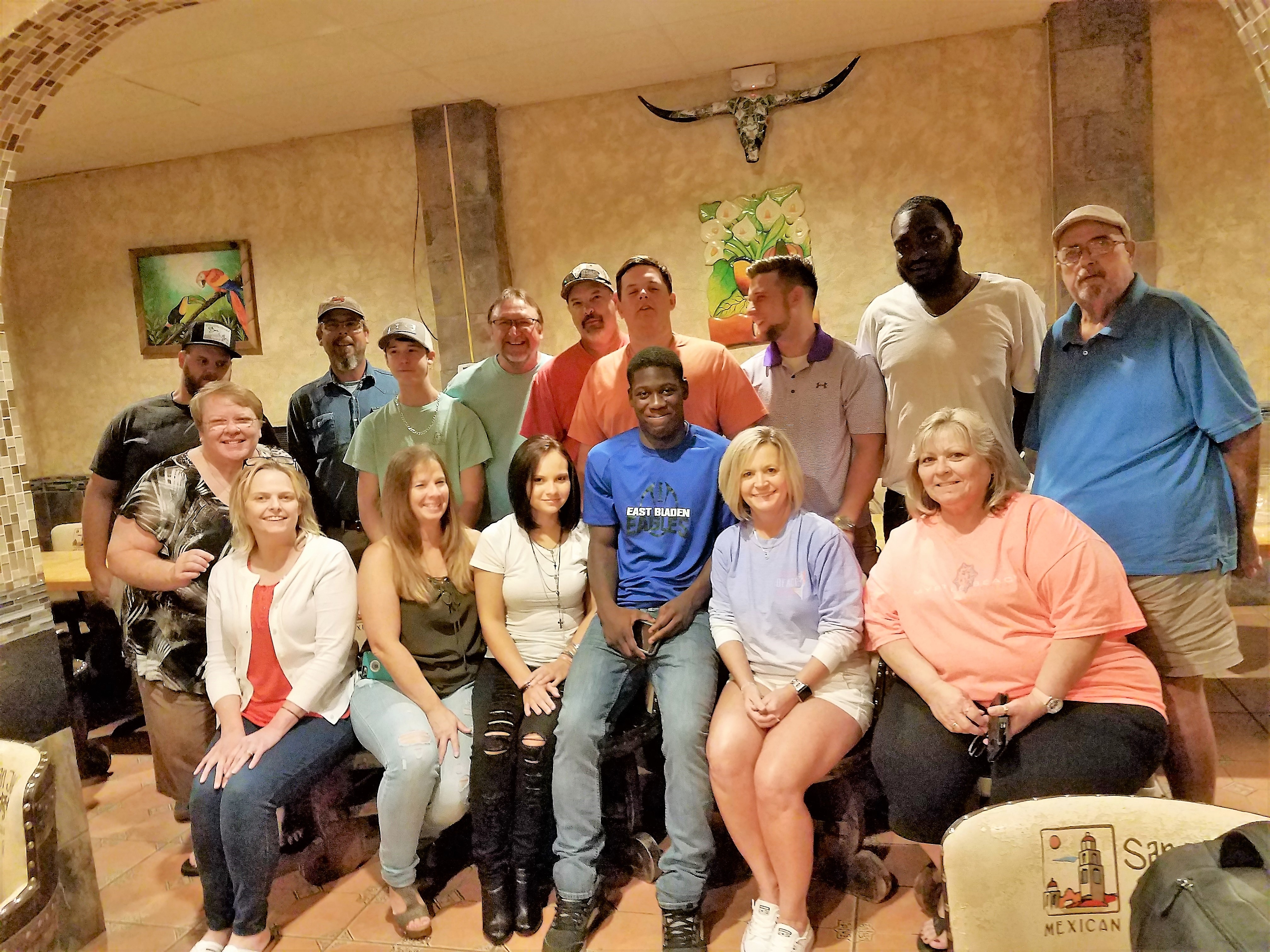 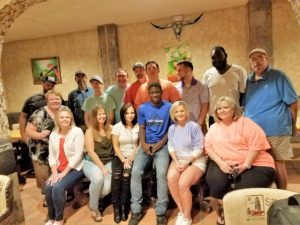 There’s an old saying, “It takes a village to raise a child.”  That is definitely true for Sincere Smith.

Drafted by the New York Yankees last week, Sincere will graduate from East Bladen High School this Saturday and will leave for the Yankees’ rookie camp in Tampa, Florida on Sunday.  He is only 18 years old.

Thursday night, the adults from the Clarkton Dixie Youth Baseball league who volunteered when Sincere was a little boy met for supper at San Jose to reminisce and to celebrate Sincere’s accomplishments.

None of these adults is coaching any longer, but they all remember when Sincere was a tiny little four-year-old who showed up to try out for a team in Clarkton.

“He was mighty little,” Coach Marvin Burney said.  “He was even little for a four-year-old. But he had this humongous smile.”

Burney’s wife, Marsha, was coaching the youngest age division (six- through eight-year-olds) in Clarkton that year, so Burney told her to let Sincere try out for the Coach-Pitch team.  Marsha thought he was too young.

“He was four — about to turn five,” Marsha Burney said.  “I thought he was Tee-Ball age.”

Then she saw him field ground balls, throw to first from shortstop, and hit a thrown pitch pretty hard to the outfield.  “I knew if he went to Tee-Ball, he’d kill somebody,” Marsha Burney said. “He was awesome!” Needless to say, that first year, Sincere played on the team for kids almost twice his age.

And so it began for Sincere and his baseball career.  But it also started a bond between the adults in the Clarkton Dixie Youth program and the young child.

Kathy Coates, the wife of Coach Randy Coates and herself a dedicated volunteer in the program (concession stand coordinator and league treasurer for many years), was the one who gave Sincere his nickname.

“The coaches always insisted that the kids run out on the field when it was time for them to play defense,” Kathy recalled.  “Sincere grabbed his glove and skipped all the way to shortstop — just as happy and carefree as a child could be.” When the inning was over, he skipped back to the dugout.  Miss Kathy, who was always famous for yelling encouraging words to all the players, called out, “Way to go, Skippy!” from behind the fence. The nickname stuck and has followed him even to today.

Since running a Dixie Youth ballpark in a small town takes a lot of work, this group of coaches and volunteers spent countless evening and weekend hours at the fields.  They became a family, and while they all had their own children with them, Sincere was there, too.

“We all love Skippy,” Marvin Burney said.  “He was everybody’s child at that ballpark.  Maybe we spoiled him a little, but he was such a good kid.  He always had a good attitude. He was very coachable. He was never a minute’s trouble.  We couldn’t help but spoil him, and if we had it to do all over again, I think we’d do it just the same.”

The Clarkton DYB group said they were proud of all of the kids who came through their program and did something with their lives.  Former Clarkton DYB players are now lawyers, accountants, teachers, preachers, policemen, nurses, radio sports announcers, physical therapists, truck drivers, bank executives, farmers, and military personnel.  In the last 20 years, Clarkton Dixie Youth has had three former players drafted to play professional baseball — Tyrell Godwin, Toebius Smith, and now Sincere.

“We are extremely proud of the paths that a lot of our kids have chosen and how successful they have been,” Coates continued.  “To have three who were drafted by the MLB, well, that’s just icing on the cake.”

Thursday night, the coaches spent a lot of time saying, “Remember when …?” to Sincere as they thought back to funny times, great plays that Skippy made, fun places they all went together.  There was lots of laughter and love bouncing around the room.

Marsha Burney brought a special item to the party Thursday night — Skippy’s very first baseball glove.  It was a hand-me-down from Alex Coates (Randy and Kathy’s son) who was a couple of years older than Sincere.  “Skippy used it for two years before he outgrew it,” Marsha said. “I’m not sure why I kept it. I guess I thought back then that he may want to have it one day.”  The tattered glove is not usable anymore, but it’s a part of him — and a part of them.

Coach Eric Ransom remembered when he coached third base and Coach Eric Rogers coached first.  “Rogers and I always said when Skippy got on first, we’d give him the signal to steal second,” Ransom said.  “But it never happened like that. Skip would always get on, but stealing just one base was never enough for him.  He’d take off for second, round the bag, and be running wide open toward me. I’d think about trying to hold him up at third, but his momentum would be full speed, and he’d steal home, too.  That boy was fast!”

Coach Rogers added, “We could count on it every single time.  When Skippy got on base, he was an automatic run. You could go ahead and mark it down in the book!”

Not all of their memories were made at the field.  Kathy Coates remembered a vacation spent at the beach with some of this group and their kids.  Sincere went, too. “Skippy couldn’t swim, and Marsha was afraid he would drown in the ocean,” Kathy said with a laugh.  “So we dressed him up with arm floaties, a big float around his waist, a snorkel, and flippers. You should have seen that child.  He looked like a little Scuba Steve!” Then, the whole group chuckled at the memory.

Alex Coates grew up with Sincere, playing in Dixie Youth together and then later for the East Bladen Eagles.  Alex remembered one time going to practice at East Bladen when he and Sincere were riding together. Alex had just started driving, and Sincere fell asleep on the way.  Alex was pulled over by a policeman for speeding, and Sincere didn’t wake up until the policeman tapped on the window. “Sincere was scared to death,” Alex said. “His eyes were as big as baseballs!”

“You were scared, too, Alex!” Sincere answered.  “Go ahead and admit it.” Then, the two young men laughed and laughed.  Fortunately, Alex only got a warning that day.

Coach Tammy Edwards remembered a not-so-happy memory with Sincere, too.  Miss Tammy is the assistant manager at the grocery store in Clarkton. One day, Sincere and a couple of other little boys came in the store (they were about nine years old).  The boys decided to take a can of Fix-A-Flat without paying for it, but Miss Tammy was watching them. She stopped them on the way out the door.

“Skippy was so embarrassed,” Miss Tammy recalled, “and he looked so remorseful.”  But, she said she knew she had to do something, so she called Sincere’s coach at the time, Marvin Burney.  “Skippy told me to call his mom, call the police … call anybody but Mr. Marvin,” Tammy said. Marvin went to the store, apologized to Tammy, paid for the can of Fix-A-Flat, and took Sincere home with him.

Coach Marvin decided it was an opportunity to teach little Sincere a lesson.  He explained why you can’t take something that is not yours without paying for it.  Then, Mr. Marvin put Sincere “in charge” of the can of Fix-A-Flat for the whole season.  Every day before practice or a game, Sincere had to get that same can out of the equipment bag and put it on the shelf in the dugout.  After every game, Sincere had to take the can and put it back in the equipment bag. “I needed for him to remember the lesson,” Marvin said.  “I needed for it to stay in his mind that what he had done was not a good choice.”

For months, Sincere had to touch that can and had to be reminded of the day he took something that wasn’t his.  “And I haven’t stolen a thing since that day,” Sincere added. “No, sir, I wouldn’t even think about taking something that isn’t mine.  And, I hate Fix-a-Flat now!”

There was also a lot of advice given Thursday night to the young man who is going so far from home.

Coach Lea Ransom advised Sincere, “Never forget where you came from and always remember that you are loved!”

Kathy Coates told him, “Remember that ‘family’ is not always blood.  Family isn’t about the color of your skin. It’s about love, and we will love you no matter where you go or what you do!”

“Use your manners, and brush your teeth every morning and every night,” Miss Marsha chimed in.

Coach Randy Coates added, “Stay focused on baseball, Skippy.  Leave all the other stuff alone. Make it all about baseball — and baseball ONLY!”

Lisa Rogers said the whole group was going to pray even more for Sincere now.  “Prayers will work,” Lisa said. “And God will see him through.”

“Have fun and enjoy what you do best.  Call me any time of the day or night if you need me,” Mr. Marvin added.

“God is always going to be with this child — our child,” Miss Kathy concluded.  “Even when we are not with Sincere, God will be there for him.”

Though they will not making the move to Florida, Skippy’s village really will be going with him.