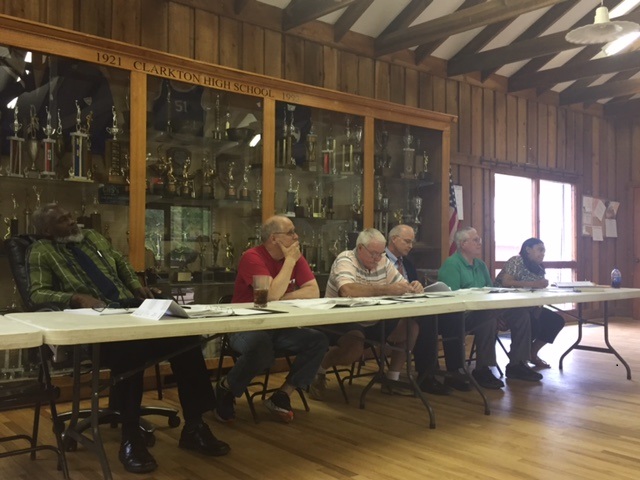 Clarkton Getting Another Solar Farm 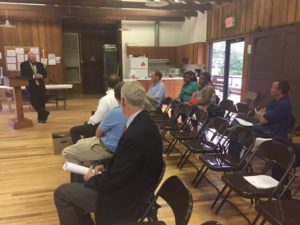 The town of Clarkton will soon be getting another solar farm following the granting of a conditional use permit on Tuesday night. Sadiebrook Solar LLC petitioned the town of Clarkton for the permit for a 28-acre solar farm to be located north of the town on S. College Street.
Sadiebrook Solar LLC has leased 28 acres of a 107 acre farm owned by Mr. and Mrs. Prease, according to David Neill, an attorney with the law firm of Smith, Moore and Leatherwood of Durham, was representing the group. He said the project is located in an area in the town’s extraterritorial jurisdiction which is zoned RA (residential/agricultural). The tract is also close to a utility transmission line.

“We’ve got quite a bit of experience,” said Ness. 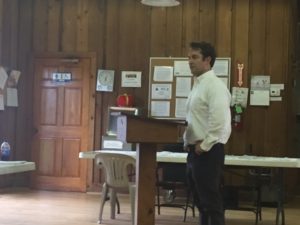 The revised site plan was presented which has incorporated the requested changes made the planning board. He said one request incorporated into the plan is for the vegetation to be at least as tall as the fence. One explicit condition placed in the plan states if a shrub or tree does not survive, it will be replaced.

David Bruek, project engineer, addressed the board and said Southern Current has worked with the planning board to make sure the project meets or exceeds all the setbacks on College Street. No tree clearing and a 6-foot tall fence and 6-foot tall plants would be installed. When asked what type of plants would be used, Bruek said he was not sure.

Bruek described the solar panels as 72 cell crystalline panels which are staggered and measure 5 to 6 feet tall and 3 to 4 feet in width with a 20 to 25 degree tilt. He said Southern Current has met with Duke Energy and discussed at length the connection which will be made to Duke Energy’s system.

Bruek said access to the site will be through a locked gate and the site will not be accessible to anyone but authorized personnel. He said once the project is fully operational, there will be no traffic at the location except for a couple of times per year for maintenance purposes. 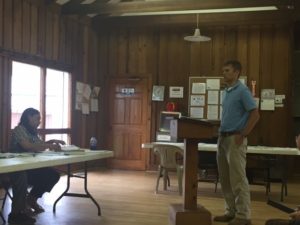 Tom Hester, appraiser from Guilford County, addressed the board and said he has studied the impact of solar farms on surrounding land values extensively. He told the board he has examined sales data, he has visited solar farms at different intervals following construction, and compared sales of similar properties where there are no solar farms. He told the board there is no effect on adjacent land.

Town Councilman Tim Tart asked about the maintenance of the vegetation between the fence and the roadway. Bruek said Southern Current has a crew that will mow grass and maintain the vegetation.

Mr. Cox, who owns the property across the highway asked Neill, the attorney, for Southern Current, why some solar energy companies purchase land and others choose to lease land. Neill replied it depends on the company’s business model. Cox then asked about the decommissioning of a site.

Mr. Cox asked about the costs of cleaning up the land. Ness said the costs to clean up the land and restore it were low. He did not give exact figures.

Councilman Tim Tart asked about voluntary annexation of the site and Town Attorney Cliff Hester told him the board does not have the authority to do that. “If they petition to be annexed which could happen then we accept them as part of the town, but just the fact they are in the ETJ does not mean that we can make that condition,” said Hester. He said the other solar farm on College Street was a different situation.

Councilman Lawrence McDougald said he was of the impression if the project met all of the conditions, the town had to agree to “go along” but when the criteria for solar farms was being established by the planning board, it was with the idea the town would benefit. McDougald said the way this project is developing, the only person to benefit from the project will be the landowner.

“We had not heard that request. We had understood that is not possible for us,” said Attorney Neill. He said that Southern Current does not own the property and is only leasing 28 acres of a 107 acres farm.

The board voted to approve the conditional use permit with Councilman Tim Tart voting no. 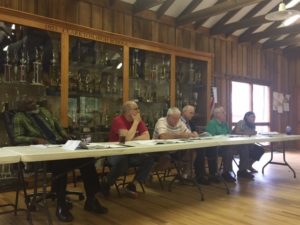 One item conspicuously absent from Clarkton’s meeting agenda was the discussion of law enforcement. The prospect of hiring county deputies to provide law enforcement was not discussed during Tuesday’s meeting at all. However, in a copy of the minutes of the May 2 meeting, it is noted Town Councilman Tim Tart said “he didn’t think the town needed any deputies.” According to the May minutes, Tart is noted as having told the board it would be cheaper for the town to hire an outside security company to monitor the security cameras. No further action was taken, according to the minutes.