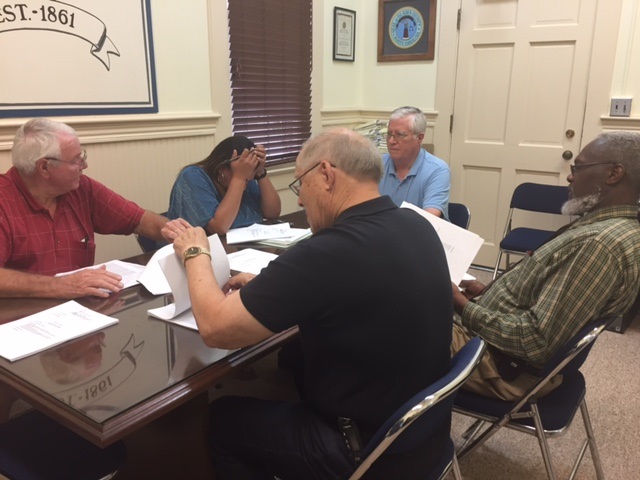 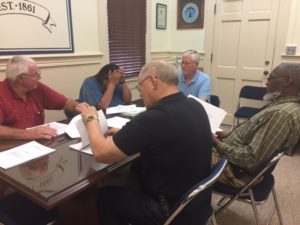 The Clarkton Town Board voted to adopt their budget on Tuesday and approved a contract with the Bladen County Sheriff’s Office to provide the town with two deputies at a cost of $104,000. The board voted to approve the budget after they conducted a public hearing during which no one spoke.

Town Commissioner Tim Tart said the town had $50,000 budgeted for the Sheriff’s Office. He proposed adding the remaining $54,000 from the town’s appropriation funds to that item and proceed with the contract. “That gives us one year to work it out,” said Town Commissioner Tart.

Town Commissioner Lawrence McDougald said there is a grant the town could pursue that would provide some funding at a rate of 75/25 for three years. The town would have to pay a 25 percent match. He added grant funding won’t be available during the first year of the agreement because the town has not applied for funding.

“We need to go ahead and get the program going so we can get something out of these cameras,” said Tart.

The board voted unanimously to approve the agreement with the Sheriff’s Office.

The town approached the Bladen County Sherriff’s Office earlier this year and requested a cost estimate for two full-time deputies assigned to patrol the town. The town has recently completed installation of 16 security cameras that were purchased from Tyco last year at a cost to the town of $150,000.

In addition to funding for the agreement with the Sheriff’s Office, the budget does not include a tax increase. The ad valorem tax rate for the town remains steady at 0.61 cents per $100 valuation. There is also a 2 percent cost of living adjustment for all town employees.

Town Commissioner McDougald made a motion to name Chris Hall as the town’s Public Works Director. He also made a motion the town provide Hall with a town owned vehicle to drive home and the other town vehicles remain at town hall. The board approved both measures.

Town Commissioner McDougald also requested the mower which is currently located at the ball park be returned to the town and the town will mow it every two weeks. A question was raised if the town owned the ball field.

In new business, Kentrina Woods presented the board with a request from Clarkton Baptist Church regarding their water bill. She explained the meter is showing 16,000 gallons of water as being used. She asked the Public Works to reread the meter when it showed up on her high/low reading report. She said it appeared the meter was reading correctly. The church only has water on the account. The bill for the month was $165. Normally, the church pays a minimum. It was decided the church would have to pay the bill.

During the open discussion, Town Commissioner Tim Tart asked why Gildan does not have to pay taxes on newly installed equipment. He said he would like to have Bladen County Economic Development Director Chuck Heustess attend the town’s July meeting and explain the situation.

Town Commissioner McDougald asked how the taxes are billed. Town Clerk Kentrina Woods replied the tax bills which will be mailed in August are for the 2017 tax year.

The board voted to schedule the July meeting for Tuesday, July 11, at 6 p.m.