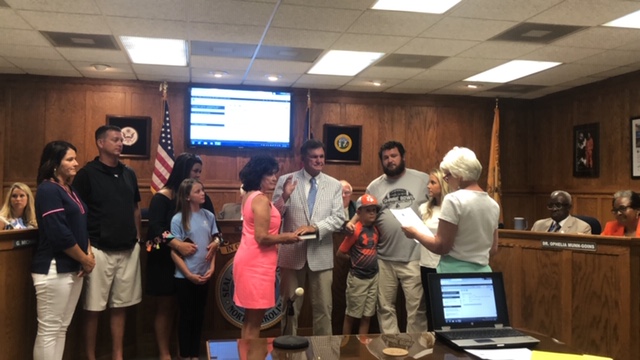 Loyal, a good friend, a good citizen, tough, a servant, funny, a great father and husband – those were some of the words used Friday as friends and colleagues remembered East Bladen Coach and Bladen County Commissioner Russell Priest who passed away Thursday.

“His loyalty – to me, the athletic program and the school – that’s what stands out the most about Russell,” said longtime East Bladen football Coach Lenon Fisher. “When I came here in 1980, he had been an assistant here for 1 or 2 years, and he kind of took me under his wing. You couldn’t have asked for anyone better. He was a great friend.”

“Whatever needed to be done for the football program or for any of the other sports, he would do it,” continued Fisher. “He was one of the most competitive people that I have ever known. Everyone hates to lose but Russell took it to another level.”

In the political arena, Priest first served on the Elizabethtown Town Council for 11 years before being elected to the County Board of Commissioners in 2010. “His passing is a huge loss,” said County Manager Greg Martin. “He had a great love for Bladen County -especially for the youth of Bladen County. He was a great supporter of education, and was so well known by everybody.”

Eddie Knight of Tar Heel noted that Russell’s passion carried over from sports into the political realm. “He gave it all he had, and when you were his teammate, he expected you to have that same desire. As a commissioner, he really helped us out with some needs for our Fire Department.”

“Bladen County has lost a good citizen, and I have lost a longtime friend,” added Knight. Priest and Knight were teammates on a Kinlaw Insurance team that won the 1978 Amateur Softball Association Class B State Championship.

Worley Edwards, a member of the Columbus County Board of Education, was also a member of that 1978 state championship team and recalled another season when Russell was badly hurt by a line drive to the face in the Azaela Festival Softball Tournament in Wilmington. “I ran to him, and he’s laying in this great pool of blood, but he asks, ‘did we get him, did we get him out?”

“He was the toughest man I have ever known,” stated Edwards. “And a good friend. When Russell stood beside you, you had a great friend.”

Another Bladen Commissioner, Charles Ray Peterson, was also a member of that 1978 state championship team. “Russell was a great guy and a good friend. He is going to be missed,” said Peterson. “He loved sports, especially baseball and football.

An ‘old coaches’ meeting had been scheduled for Friday morning as longtime area coaches Wayne Williamson and Frank Jernigan had planned to join Fisher, and Russell’s son Robby, the current East Bladen football coach, at Russell’s house but sadly it wasn’t to be.

“Russell, Frank, and myself have coached against each other for 40 years,” said Williamson, who coached primarily at West Columbus after coaching Bladenboro in the early 1980s. “I did get to spend a day with him a few weeks ago, and we drove around Elizabethtown, White Lake and out to the school. It was a good day.”

Priest was Coach Fisher’s defensive coordinator for a number of seasons. “He did it his way, but his defense would really get after you,” shared Williamson. A more humorous story occurred when East Bladen visited West Columbus one Friday night.

“I had a student manager who was in charge of locking up the visiting team’s dressing room after halftime,” chuckled Williamson. “So he looks in the locker room, doesn’t see anybody, and locks the door. Second half starts, and Coach Fisher can’t find Russell. He was in the restroom when the manager checked and got locked in. He finally beat on the door and hollered enough that the concession stand heard him and sent for a key to get him out.”

Former West Bladen baseball coach Kim Cain said, “I have known Russell since I was ten years old. He would give me a ride home after Little League games. I consider him a mentor to me and to others. When I first started coaching, I would still call him and ask for advice.”

Cain played softball with Priest for about 25 years and also played baseball with him at Southeastern Community College. “He was a public servant and a friend to everybody in this county. When we faced off on the baseball field as coaches, we fought hard, but we were friends afterward. He was the toughest man I ever met, but there’s no telling how much he has given – even out of his own pocket- to the young people in this county.”

Southeastern Athletic Officials Association Baseball Regional Supervisor Mike Parnell noted, “You always knew where you stood with Russell. He was one of those old school guys who were really knowledgeable. He was a good guy and really helped me a lot when I was starting out as a young official.”

The baseball field at East Bladen will be named for Coach Priest at some point in the near future.

Social media lit up with praise and love for Coach Priest Thursday and Friday. Tripp Lancaster, who played shortstop at East Bladen before enjoying a stellar career at Methodist, posted, “I’ve seen many sides of Coach Priest. I played under him, coached under him, called him a friend, even bought a car from him. He taught me the definition of a player’s coach. Right or wrong, good or bad, he was for his boys. I loved playing for him and loved being around him. That was a really good man.”

An East Bladen Facebook post said, “In so many ways he was the ultimate Eagle – the ultimate coach, the ultimate friend. His love for others far outweighed his love of self. Russell could always be found tending to the needs of another. Simply put, he cared about everyone – he loved everyone. His compassion was probably the most prominent aspect of his character.”

A Patriarch, Daniel Leon “Russell” Priest Jr., Has Passed On