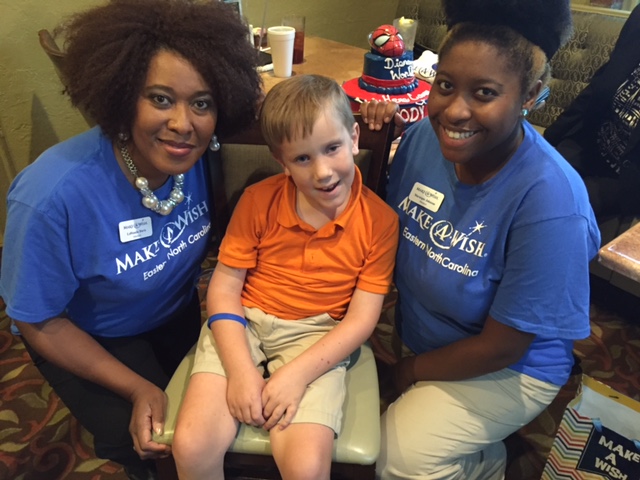 Clark was presented a Spiderman themed cake, toys, a Make A Wish T-shirt, and tickets for the theme parks.

Cody was excited as he opened his gifts and excitedly looked each item over.

Copdy’s mom Tina Clark said the trip means a lot to her and her family.

“It is exciting after all he has been through to be able to see him enjoy it,” said Tina Clark.

Chris Clark said that before Cody was diagnosed with a brain tumor, the family had been planning a trip to Disney and in September 2013, the family had begun to fill a jar up with money to pay for the trip. Chris Clark said those plans were put on hold when Cody was diagnosed with a brain tumor in December 2013 and had surgery and began treatment shortly thereafter.

Chris Clark said that the without organizations like Make A Wish there wouldn’t be a trip or vacation.

The family will be staying at the Give the Kids World complex.

Chris Clark said of LoWanda and Marnique, “If it wasn’t for these ladies, there wouldn’t be a trip. They’ve been wonderful to us.”

Davis has been with the Make A Wish foundation for four years and her daughter Marnique Johnson has joined her.