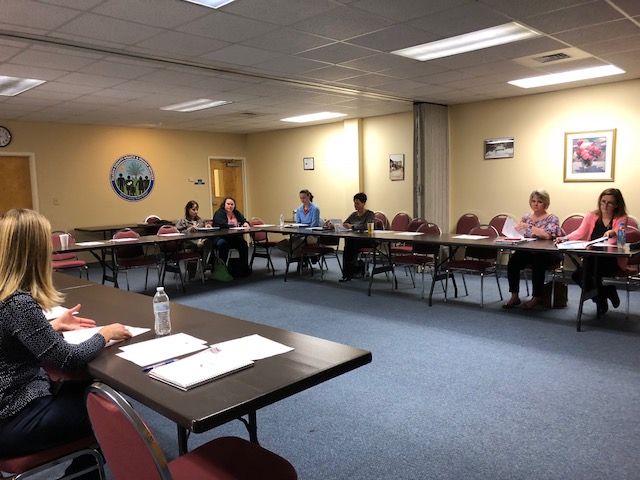 “Dr. (Robert) Taylor volunteered us to participate in a pilot project in 2016 and we started last year,” said Bladen County Schools Lead Nurse Willie Kay McDuffie. “The really cool thing that we have been able to do is the risk survey in middle school and high school and have our own district data set which is really unusual.”

McDuffie spoke to the Collaborative members present the pilot program is a three year project. She said one of the items in the project which has proven beneficial is the youth risk survey which was performed in 2017 and will be done again in 2019. She explained that district surveyed all of the 5th through 8th grade students and East Bladen and West Bladen high schools were also randomly sampled. McDuffie said the high school information is complete and the middle school information will hopefully be completed soon.

“We’re doing some really good things in Bladen County. There were lots of positives and then there are things that we see that we need to work on. They match the trends with the rest of North Carolina according to DPI,” said McDuffie.

She noted that survey results will give the district their own data set to use to compare and track trends locally and compare them to North Carolina and the nation.

McDuffie said the most recent meeting of the WSCC group, Kelly Langston, with the North Carolina Department of Public Instruction met with the group and reviewed the high school survey information.

“It was really eye opening, I think, for some things, both positive and some things to work on,” said McDuffie.

She said for instance e-cigarettes and juuling, those numbers on the survey are higher for students saying they have been juuling than for experimenting with e-cigarettes. McDuffie also said the results for questions dealing with underage alcohol use were “shocking.” Another issue the survey revealed was a large number of students who admit to texting while driving.

“Marijuana use is a what I would say was a little higher,” said McDuffie. She also noted she could not recall the exact the numbers as she did not have the data with her.

“I consider that (marijuana) a gateway drug,” said McDuffie. She reminded the Collaborative members that several states have taken steps to legalize marijuana sales.

She said heroin and cocaine were very small in number but McDuffie added that sexual activity was revealed to be very high. She added the survey also rated condom use as pretty high.

McDuffie also said students who said they felt sad and hopeless were a lot higher than she would like to see on such a survey.

“Mental health, drug use, reproductive health, those are all things on the forefront that we need to be working on,” said McDuffie.

“Were opioids part of some of that?” said Commissioner Peterson.

“Opioids was not a specific question. The question was —this is not a Bladen County Schools survey this is a youth risk behavior survey from the Centers for Disease Control,” said McDuffie.

She said the question was formulated as misuse of a prescription drug from a family member or physician that was not yours. McDuffie said she could not recall the exact numbers but some students did reply they had misused prescription drugs.

“The question that came out of that was what is misuse? Does that mean I didn’t take it the full time of the prescription. Did I take somebody else’s medicine?” said Amy Stanley, School Nutritionist. “So the question was kind of vague.”

McDuffie said on the assessment tool Bladen County Schools is going to add a section for people to respond with what programs are being offered to include what kind of educational programs (drug abuse awareness, alcohol awareness etc.) are being offered in the middle schools and high schools.

She added that Bladen County Schools staff have been invited to the upcoming State School Board meeting along with three other school systems in the pilot program to present information regarding the WSCC program.

McDuffie also said the Friendly Dental van continues to visit the middle schools and their goal is to provide dental care to students whose parents cannot take them to the dentist. It is for students with Medicare insurance and uninsured, according to McDuffie.