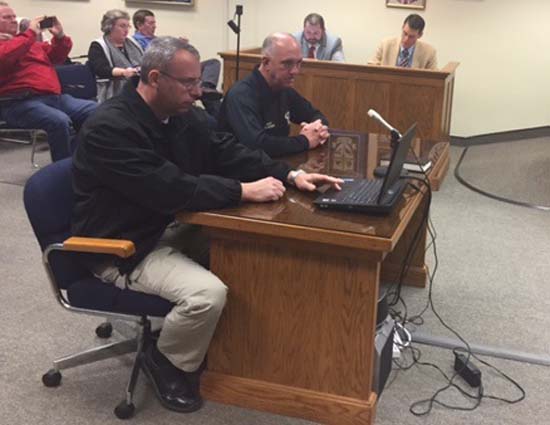 The agreement calls for the North Carolina Highway Patrol Sheriff to pay the county a sum of $4,500 every nine months for a period of 36 months to be paid on monthly installments of $500.

Sheriff McVicker explained that if the lease agreement were any longer than nine months at a time, it would have to go before the Council of State and be approved by them. The board voted unanimously to approve the agreement.

In other business, the Commissioners conducted a public hearing regarding an Animal Control Ordinance Amendment. No one spoke at the public hearing and the board voted unanimously to approved the amendment.

County Manager Greg Martin updated the board regarding two Bladen County folks who were recognized during the annual meeting last week. Martin said that Bladen County Commissioner Billy Ray Pait was named as recipient of the leadership award and Clerk Maria Edwards was named Regional Clerk of the Year

The board voted to table making any advisory board appointments to allow new members time to review the appointments.

The board heard from County Manager Greg Martin regarding setting a meeting to discuss an appeal by CB Bladen Solar regarding their denial of exclusion status. The meeting is scheduled for 5:30 p.m. on January 3.

The board also named Commissioner Ray Britt as the voting delegate for the upcoming NC Association of County Commissioners 2017 Legislative Goals Conference.  The board scheduled a planning session for January 9 at 5 p.m. and approved an amendment to the Inmate Labor contract which adds the town of White Lake to the contract.