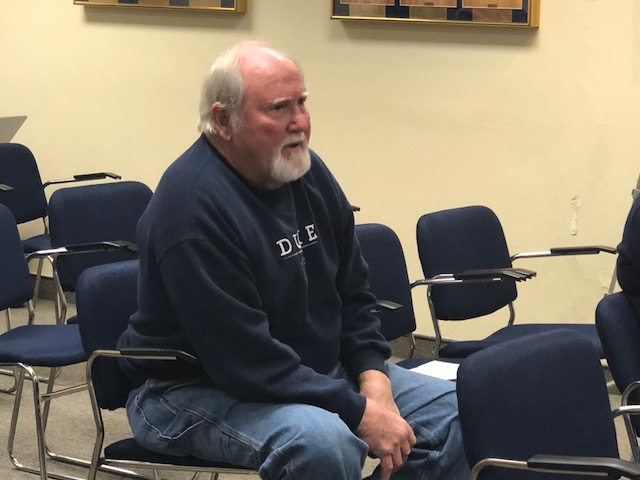 Commissioners hear from Joe Britt about road side hunting

Martin said, “We’ve consulted with the folks at the School of Government. That really is a local law that would need to be approved by the General Assembly specifically for Bladen County.”

He said county staff have also held conversations with the NC Wildlife Commission regarding the matter. They suggested the county consider wording to read, “It will be unlawful to hunt or discharge a firearm on, from or across a state maintained highway.”

Martin added that since the last board meeting, it has been suggested to also add a provision that would make it illegal to retrieve hunting dogs from the side of a public road while in possession of a loaded gun.

“It may be best to go back and have further conversations with Wildlife (Commission) and see how the wording may need to be,” said Martin.

“The only thing about what the Fish and Wildlife put, it’s too easy for the people out beside the road to say we’re not hunting, we’re just getting our dogs,” said Britt. “So that is why I want to put that it’s illegal to be beside or on a public road retrieving your dogs with a loaded weapon.”

Bladen County Commissioner Charles Ray Peterson said, “I would like for us to have a public hearing at our next meeting and be prepared to vote on it after the public meeting. I think we need to get all of the input we can so that all citizens will be represented.”

Chairman Ray Britt noted Peterson’s request and remarked it would give Martin time to make further inquiries regarding the matter.

Doug Smith from Ammon also spoke in support of the measure. “I really think this is a serious public safety issue for our community. I know I have a lot of folks visiting and they are shocked to see people standing out beside the road with guns when they come by.”

Dale Smith also spoke in favor of the matter. He showed the Commissioners a photograph of hunters on his posted land. He said the hunters will park on the edge of the highway and he also noted that the hunters do not abide by the posted signs. Smith said he has witnessed two people being shot because of a confrontation between landowners and hunters.

“It is escalating to the point something needs to be done”said Dale Smith.

Commissioner Ophelia Munn-Goins said she, too, has concerns after her own incident involving roadside hunting.

“I have some complaints and issues on our end. Actually, I hit a dog and I was so upset. I wasn’t going more than 20 miles per hour, but they were hunting from the highway,” said Munn-Goins.

She said there are concerns with residents who have homes nestled in the woods and they cannot be seen from the roadway.

The board voted to approve conducting a public hearing on Monday, February 19, at 6:30 p.m. regarding the matter.

*The board approved a temporary part-time administrative grant position at $14 per hour for Emergency Services.

*The Commissioners approved $21,000 for the removal of asbestos floor tiles in the former Sheriff’s Office building.

*The board voted to adopt two resolutions supporting the installation of left turn lanes to be installed at NC 87 and Baltimore Road and at NC 211 and Elwell Ferry Road.

*The board approved a rezoning request for a parcel of land owned by Andrew Rich. The parcel located at 2317 Burney Road will be rezoned from Residential/Agriculture to Commercial for a used car lot.

*The board approved the consent agenda which included budget amendments, county attorney invoices, a declaration as surplus for a service side arm and a gold Captain’s badge, GEEP Electronics Recycling services agreement, and the minutes of the January 16, 2018 special meeting and regular meeting.