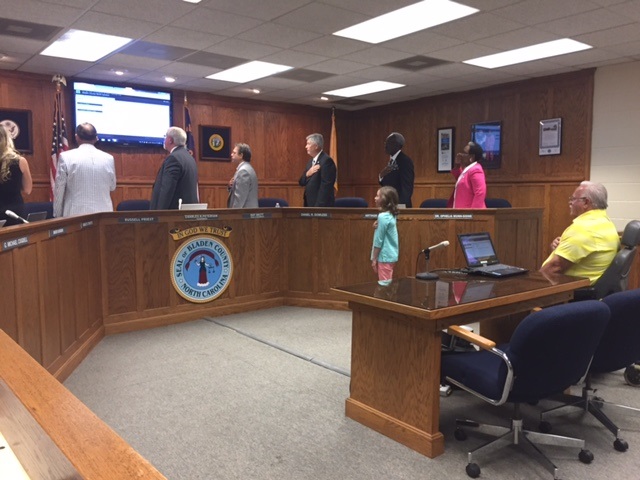 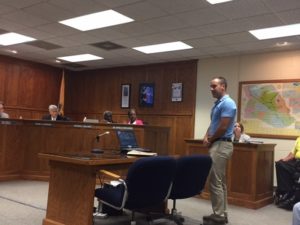 The Bladen County Board of Commissioners learned about plans for the proposed Cape Fear Region Bicycle Plan on Monday night. Stephen Bzomowski, Senior Planner, addressed the Commissioners about the plan and the board adopted a resolution of support for it.

The Cape Fear Region covers several counties including Bladen County, said Bzomowski. He said the purpose of the plan is improve mobility, safety, health, economy, the environment, and overall quality of life in the area.

“We want average residents to be out there and feel comfortable,” said Bzomowski of the plan.

He said developers of the plan have been working to reach citizens and educate them about the proposed plan by attending public outreach events. He said surveys have also been issued online and paper surveys had also been distributed.  There was an information session on the proposed bike plan conducted in Elizabethtown in March.

He told the board one of the overall goals of the plan is safety for those who enjoy bicycling. He said about 80 bicycle crashes occur each year in the Cape Fear Region. He said the plan calls for such things as separated bicycle lanes and linking the towns and areas together.

Bzomowski said the proposed plan incorporates recommendations from the Steering Committee, the feedback gathered form the public, input through the project’s website, and county presentations and a presentation to the RPO Transportation Advisory Committee.

When asked where the design for the Bladen County section was derived, Bzomowski said it was developed from the town of Elizabethtown’s 2015 Bicycle Plan. He added the committee is trying to establish countywide activities. He said there are both short-term projects and long-term projects in the proposed plan.

Bzomowski said as part of the plan there will be brochure maps which will printed and distributed throughout the region. He said the plan can also be used for future grant applications.

Commissioner Michael Cogdell asked how much funding would go with the plan. Bzomowski said there is no funding set aside but project can be highlighted for future funding.

The board voted to approve the resolution of support for the plan.

In other business, Ava Bordeaux led the board in the Pledge of Allegiance.

The commissioners heard an update from Dr. Bill Findt about Bladen Community College being in the process of making an application for Bladen County to be certified as a Work Ready Community.  By participating in the Work Ready initiative, counties can both identify skill gaps and quantify the skill level of its workforce.  This helps educators build career pathways aligned to the needs of business and industry and it also helps a community stand out and be recognized for its workforce development efforts.

The Fees & Eligibility policy was updated/amended under Family Planning Patients, Direct Patient Charges, and No Mail Policy for Confidential Patients.  A recommendation was made by the Health & Human Services Agency Advisory Committee at its August 14, 2017 meeting. The Commissioners voted to approve the changes.

A recommendation was made by the Health & Human Services Agency Advisory Committee during its August 14, 2017 meeting. The commissioners approved the application.

Mr. Howard, Bladen County Health and Human Services Director reminded the commissioners about an Opioid Forum specifically for county commissioners which will be held on scheduled for Tuesday, September 12. The meeting will be open to the public. Commissioner Arthur Bullock asked if another forum could be held for illegal drugs. Howard said the suggestion for another forum may be made at the meeting on September 12th.

An update was given by Lisa Coleman on the financial dashboard

New appointments were selected for county advisory board seats.
Greg Martin, County Manager, gave the calendar update. Bladen County Schools will hold their opening convocation at 8:30 am on Wednesday, August 23rd at Elizabethtown Middle School. Summer Sounds Concert will be held Thursday, August 24th at the Cape Fear Farmer’s Market with Black Water Rhythm and Blues will be playing, and a Town Hall on August 31st will be held by Congressman Rouzer at the Cape Fear Farmer’s Market.
Share: