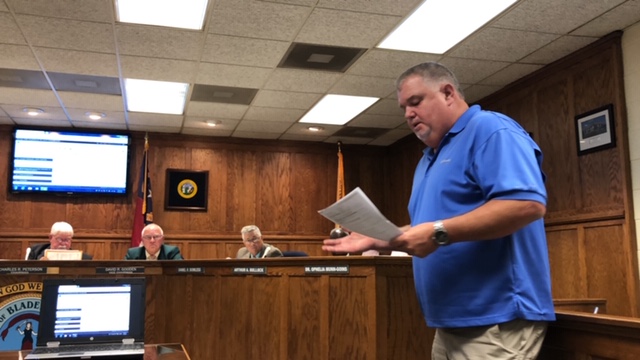 Commissioners voted to abolish the Coroner’s Position in Bladen County

Bladen County is one of only three counties in North Carolina with an elected coroner’s position left according to Ms. Trish Fore, BS, D-ABMDI, Staff Development and Training Coordinator with the North Carolina Medical Examiner’s Office. A coroner is an elected official who is responsible for the investigation of deaths occurring within a specific jurisdiction, as required by law. Mr. Kenneth Clark of Clarkton was elected Bladen County Coroner during the 2018 elections.

Specifically, coroners are responsible for conducting investigations to determine cause and mode of death. Their work requires them to be on call 24 hours a day, 365 days per year according to textbooks. On Monday evening, during the Bladen County Board of Commissioners meeting, a resolution was passed to abolish the historic elected position.

Fore presented the reasons why counties currently use medical examiners instead of coroners. Medical examiners must have training such as, they must be a doctor, physician assistant, nurse or emergency medical technician. Also, if the death is due to a homicide or a drug overdose, there needs to be an investigation and data needs to be kept for records. Another advantage of using the state funded medical examiners system is uniformity.

Chairman of the board, Charles Ray Peterson asked, “How much is this going to cost the county?”

The program is funded by the state, however the cost for the county will be $200 per medical examiner investigation in the county, Fore explained.

After Fore’s presentation, Commissioner Michael Cogdell made the motion for the resolution to be made requesting the NC General Assembly to abolish the coroner’s position in Bladen County. Commissioner David Gooden gave the second. The vote passed unanimously.

After the vote was made Mr. Clark, present at the meeting, voiced his concerns. Clark stood before the commissioners and gave an emotional plea in reference to his position. Before he addressed the issue of his position being abolished, he thanked everyone for allowing him to serve the county for 17 years.

Peterson asked Greg Martin, Bladen County Manger, to make a note to find out the answer to Clark’s question.

Clark then said, “I voiced some concerns about the county’s well being to Mr. Martin and I want to be brought to the foresight because the county needs to be covered.”

Clark explained, “Because if one of your loved ones died, the hospital doesn’t know what to do with that body. They called me this weekend, so um, it’s just with heavy heart because of the county.”

Peterson said he appreciated Clark’s service and understood Clark’s position, but the state was changing the way they handled deaths.

“What I understand is the direction from the state is the medical examiners will handle the deaths, if that isn’t correct we will find out and then discuss it further,” Peterson said.

Clark raised a question about Mr. Hubert Kinlaw, the former Bladen County Coroner and himself being given the titles of medical examiners at one point in time, but didn’t understand how the title was taken from him once Mr. Kinlaw retried.

“Just to be clear, I was medical examiner and assistant coroner until they changed their system,” Clark stated.

Clark said he was paid $5600 per year for his position.

Clark asked when the change would take effect. Peterson said maybe in about a week because it has to pass through the assembly first.

“I just want the county to be taken care of,” Clark said in closing.

Dedication and service to community celebrated by Bladen County Commissioners