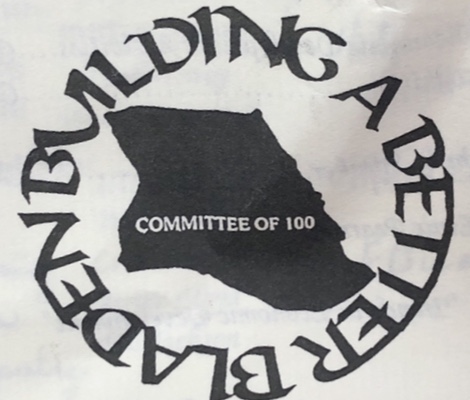 A list of 12 accomplishments were listed on the event program. Heustess announced the committees accomplishments and the projects the group is currently working on. He said, “We finally were able to open the small business incubator.”

The Committee of 100 contributed $15,000 for the Elizabethtown Downtown Business Incubator. Currently, Bladen Community College’s Small Business Center, along with two other businesses; Pink Passion, Seashore Massage are currently using the facility for their offices. The Elizabethtown-White Lake Area Chamber of Commerce will move in an office space as well, according to Heustess.

The committee contributed $5,000 to Bladen Community College to help fund their new Science, Technology, Engineering and Mathematics (STEM) facility. The facility will be key to the BCC’s endeavor to train our workforce for the science and technology jobs of today and tomorrow.

A contribution of $15,000 was made for the Incubator V, a 26,490 square foot facility  in the Elizabethtown Industrial Park with a recommendation of housing up to eight different industries into the new building, according to Heustess. The committee also helped fund the effort to Master Plan the Elizabethtown Airport Industrial Park to make the park more marketable and quicker to develop in order to meet the demand of today’s economic development clients.

“We are very close to breaking ground on Industrial Incubator VI, which will allow Westwood 10,292 square feet and allow Aramark to back fill their space, creating an additional 5 jobs,” Heustess explained.

One achievement mentioned during the meeting was the expanded a speculative building in Bladenboro Industrial Park in 2009, the facility now occupied by Marlowe Farm, LLC. The group also helped finance a 20,000 square foot industrial speculative building in the Bladenboro Industrial Park in 2005, which was expanded to 49,300 square foot in 2014 and is now home to Carrol Poultry, which should employ 50 people when fully staffed.

There are plans to help the downtown area of Bladenboro since the area has been hit so hard from Hurricanes Matthew and Florence. Heustess explained, “One of the things we are exploring right now is for the Bladen County Commissioners,  Economic Development, the Town of Bladenboro, Bladen’s Bloomin Agri-Industrial, the Committee of 100, Boost the Boro and Bladen Developments to all work together to take down some of the hurricane damaged, dilapidated buildings in the downtown and replace them with a new downtown business facility that would be raised above the flood area where small businesses can move back downtown.”

On other news for economic development Heustess mentioned the impact of the new distribution center Smithfield Foods built in Tar Heel. He said the company had invested 115 million dollars adding 300 job opportunities. Smithfield also invested 20 million dollars in upgrades to the processing plant, according to Heustess.

Kuraray has invested 40 million dollars into their 100 million dollar Emission Reduction Facility, Heustess reported. They are on schedule to be completed, capturing 99% of emissions, by the end of this year.

He said, “They are implementing cutting edge, world class technology, making them an industry leader in reducing emissions and their environmental footprint.”

Kuraray also invested a 20 million dollar upgrade to one of their products this year as well.

Wart Clarkton made an investment in a Clarkton facility and is hiring over 100 employees. The company currently has eight manufacturing lines with planes to have up to 21 lines installed.

Before the meeting was over Mr. Greg Taylor with the Committee of 100 gave the membership and financial report. The group currently has 85 members according to the report with a balance of $7,936.20.

The 1-year members: Trey Duncan, William Brisson, Linda Carey and Wesley Campbell were all re-elected to serve as new members. The Chairman of the non-profit is Hayes Petteway, Vice Chairman Paul Evans, and Secretary-Treasurer is Leon Martin.

Mr. Ernie Pearson, suggested starting small IT industries as a place for Bladen County to grow.

Coding and other kind of tech services could provide more economic impact for rural areas.

Keeping vibrant downtowns is something Mr. Pearson bragged on Bladen County about doing well. Revitalizing downtowns is a worthwhile endeavor, according to Pearson.

Two awards were presented by the SEDC, the Committee of 100, and Bladen’s Bloomin Agri – Industrial. The Lifetime Achievement Awards in business community development were given to Four County EMC and the NC Electric Cooperative.

Published in Business and Local News