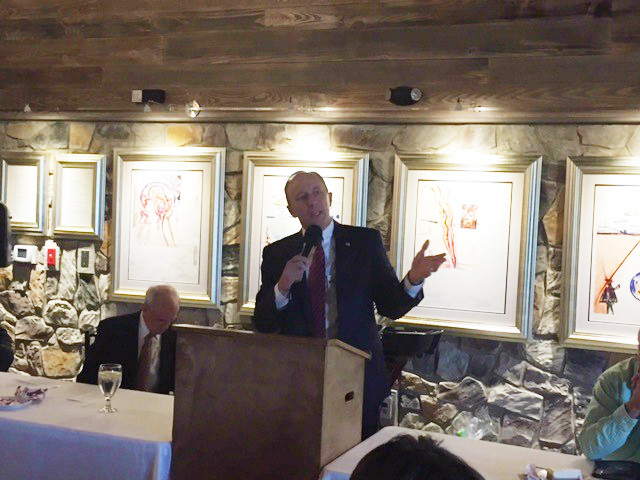 The Bladen County Committee of 100 met on Wednesday night at Cape Fear Vineyard and Winery for their annual meeting. The keynote speaker for the evening was Cape Fear Valley Health CEO Michael Nagowski.

He discussed the future of health care in the Bladen area. He began by giving those in attendance an overview of Cape Fear Valley Health system. He said the health system consisted of 8 hospitals, has a value of about $1 billion, has 7,000 employees and 850 physicians.

CFV was recently named as the state’s newest trauma center and US News and World Report designated CFV as one of the two best hospitals in the state. The hospital was also recognized by Leap Frog as one of the top 25 percent nationally. The hospital has also been recognized by the Joint Commission for hip, knee, heart, pulmonary, stroke and advanced stroke, sepsis and wound care.

Bladen County Hospital is the first in the area earn a sepsis designation, said Nagowski.

He told those gathered that Cape Fear Valley has a special relationship with Campbell University’s medical school.

“We have not had a new medical school in the state in nearly fifty years. Dr. Jerry Wallace changed all of that. Next year, the first class will graduate from there,” said Nagowski.

“We are working with them to create more training opportunities,” said Nagowski.

He added North Carolina suffers from a “very severe shortage” of medical doctors. Nagowski noted that if you train the physicians during their residencies, then they tend to stay when they graduate.

Nagowski said Bladen county Hospital has had 1,000 admissions in the past year; 200 babies have been born there: there have been 1,000 ER visits and the surgical department has performed 2,000 procedures.

“Without our hospital, folks would have to go great distances (to receive care),” said Nagowski.

He said that the hospital makes a big economic impact on the county. Nagowski pointed out two things that companies inquire about when choosing a location: they ask about schools and health care for the area.

He said that by 2008 and 2009, Bladen County Hospital had seen better days. Nagowski said the Commissioners and residents wisely got together and decided they needed to do something different. In 2010, BCH became part of Cape Fear Valley Health.

He said the Bladen County Hospital gets some of Cape Fear Valley’s best leaders.

A member of the audience asked about the long range plans for the hospital. Nagowski said that in the long plans, the county needs a new hospital. He said the current facility has held up well, but it really needs to replaced. Nagowski said to construct a new facility, it would cost about $30 million.

Nagowski that there were issues that are preventing the construction of a new facility. One is volume of patients. He said the hospital needs Bladen County’s help in order to grow the patient volume to sustain a new facility.

A second issue facing the hospital is at the federal level with the affordable care act and at the state level with the lack of Medicaid expansion. Nagowski said that in 2019, the state has written into law that health care in North Carolina will move to managed Medicaid.

Currently, a patient goes to the physician it is considered a one-time transaction. In the future, there will be a Medicaid cap on spending. There will be a cap placed on the amount of spending for Medicaid patients.

Nagowski said there are also concerns about the removal of the certificate of need from the hospital.

He said in areas like Mecklenburg County, where there are several hospitals from which to choose, therefore it is not a burden for those patients. However, in our smaller communities, where there is only one hospital, what will happen if the General Assembly removes the certificate of need, for profit entities will come into the community and target lucrative services and leave everything else for the hospital to provide, said Nagowski.

“William Brisson is behind our effort to fight this,” said Nagowski.

Leon Martin gave the Treasurer’s Report and Membership Report. He said that currently, the Committee has $17,532 with no liability and total assets of $70,532. Martin reported the membership numbers were at an all-time high in 2001-02 when the membership reached 202. The lowest was last year when the group only had 85 members. So far this year, the Committee has 47 members who have paid their dues.

The Committee voted to approve the minutes of last year’s annual meeting and elected members to the Board of Directors.

Chuck Heustess gave an update on the economic development activities that have taken place. He said that the Committee of 100 is helping to develop an Economic Development Master Plan for the Elizabethtown Airport Industrial Park to make the park more marketable.

They have contributed to construction of an industrial incubator expansion for Del-Ton, Inc. at the Elizabethtown Airport Industrial Park and are preparing to transform the former Post Office location that is across from the Bladen County Courthouse into space for small businesses; contributed to the construction of a STEM building on the campus of Bladen Community College.

Heustess said the committee has assisted with the Carrol Poultry facility upgrades at the Bladenboro Industrial Park.

Tags: Committee of 100 holds annual meeting and learns about state of health care in Bladen