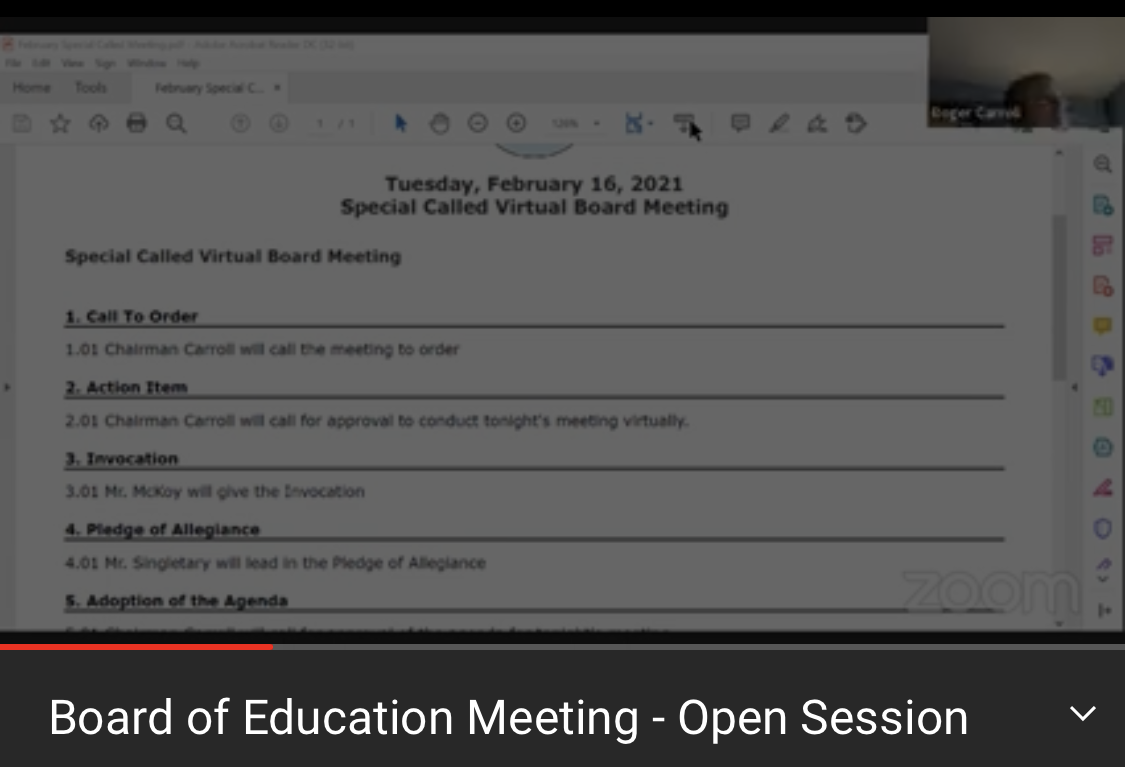 The Bladen County Board of Education met in a special called virtual session on Tuesday, February 16, 2021, at 5:00 p.m. Bladen County Schools announced the meeting on February 11. According to the announcement, the purpose of the meeting was to discuss and take action on Bladen County Schools’ Superintendent search process, discuss and take action on personnel matters as per NCGS 143.318.11 (a) (1), to enter into a closed session and to consult with an attorney, if needed, as per the NCGS 143.318.11 (a) (3).”

Before the agenda was approved, a motion was made, causing the meeting to go off-kilter.  Board member Chris Clark made a motion to go into a closed session out of turn according to the agenda.
Board member Tim Benton seconded Clark’s motion. Attorney for the Board, Gary Grady, reminded the Chairman of the board, Roger Carroll, that the purpose of going into a closed session must be stated with the motion.

Clark and Benton then agreed to amend the motion and stated the reason for the closed session was for personnel matters. Chairman Carroll then called for discussion on the action.

Board member Cory Singletary then asked, “Why are we going into a closed session when we haven’t even discussed the North Carolina School Board Association, which is on the agenda?”

Then Board member Edwards asked Attorney Grady, “How can we go into a closed session on personnel items if no kind of information is provided as to what we are walking into? Is that legal?”

Grady continued, “You can discuss an individual as to whether or not to hire an individual and to consider the qualifications and competency of an individual… Final action, however, has to be done in open session.”

Rozier then made a motion to modify the agenda by placing the closed session item prior to the open session. Benton seconded the motion made by Rozier.

Then board member Gary Rhoda raised concerns about adjusting the agenda as planned.

Singletary asked again, “Why do we need to go into closed session before we talk about the School Board Association?”

“Are we going into closed session to make a decision?” Rhoda asked.

Chairman Carroll responded, “That will be up to the school board once we get into closed session.”

“Do you have a sense of what closed session is going to be about,” Singletary asked repeatedly.

Board member Dennis Edwards spoke up and said, “I agree with that, we are going to be talking about personnel, but every meeting I go to I usually have a personnel folder. I don’t go into some kind of closed session blind, and I do not like that.”

Rhoda interjected, stating, “I don’t either.”

Edwards, continued, “I don’t think that is right. I usually have a packet to look at and study. I feel like this is being done very wrong.”

Rhoda said, “Like there is some kind of hidden agenda here.”

Carroll explained to the board members they could vote for the motion or vote not to approve the amended agenda.

Edwards asked, “Do we even have a link to go into closed session?”

Interim Superintendent Jason Atkinson said, “Mr. Carroll we do have a link for the closed session because there was an agenda item for closed session.”

Chairman of the board, Carroll, called for a vote on Rozier’s motion to amend the agenda to hold a closed session before the action item on the North Carolina School Board Association.

The board members Chris Clark, Tim Benton, Vinston Rozier, voted for the motion.

Board member Rozier explained, “I understand we are getting several people from the county who are interested in the Superintendant position, and if we don’t talk about that prior to making a decision on the school board association, we open ourselves up. When we go into a different direction how is that going to effect those folk because we haven’t had a chance to share our ideas with one another.”

Rhoda asked Rozier, “Aren’t we being biased right off the top?”

“I feel like we should advertise and pick the best person, Vinston,” Rhoda added.

Rozier concurred, “I’m not disagreeing, but we want to keep the morale in the count with the other folk pretty high also.”

Rhoda responded to Rozier again, saying, “I don’t think we need to just pick someone right off the top. I think we keep looking around. I think that we should give everybody a shot regardless of where they are from.”

Rozier agreed with Rhoda, and then board member Edwards took the floor.

Edwards asked Attorney Grady about the county taking responsibility of the Superintendent search and not using the State.

Grady said, “You have the authority to do that. Now having said that, the board has the responsibility to make sure the federal and State laws … are complied with regarding criminal record checks, and if the board does not do that, they have potential liability.”

Rozier said in his closing statement, “We have a great opportunity, and we have a great situation that really damages Bladen County if we don’t do this thing right.”

Chairman Carrol explained the North Carolina School Board was hired during the last search.

Grady addressed concerns about privacy protections and the difficulties when you have an entire board doing those things.

Board member Glenn McKoy voiced his concerns with the agenda as well. “I think another meeting would be the way we need to go,” McKoy said, “Anytime you go to a meeting you want to know what the agenda is going to be about and I think all the board members need to feel good about that. We need to revisit this agenda.”

“What we are talking about tonight is not really what half of the board members really want to talk about, or it seems to be,” McKoy continued, “I think we need to narrow down our true agenda and then go in closed session and talk about it.”

McKoy ended his comments by stating, “If we want to employ someone from within, let’s have a closed session and adopt an agenda to talk about our own personnel before we venture out.”

“We can always table the discussion…” Chairman Carrol said.

Edwards made a motion to table the agenda for the meeting, and Rozier made a second. The motion passed unanimously. The next meeting will is yet to be determined.

Before closing Attorney Grady reminded the board discussions in closed sessions could not be about hiring an independent contractor or considerations on hiring locally. Closed session concerns are for particular individuals not a group of individuals.