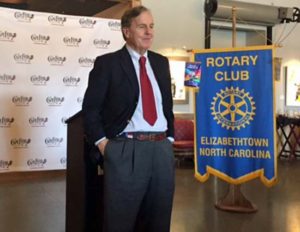 Congressman Robert Pittenger visited with the Elizabethtown Rotary Club on Wednesday prior to the club’s business session at Cape Fear Vineyard and Winery.

“We have a huge opportunity in store for us,” said Congressman Pittenger.

He noted there is a lot of excitement concerning the upcoming inauguration of President-elect Donald Trump and Vice-President Mike Pence.

Congressman Pittenger also said he will make sure that terrorists don’t have the resources they need to carry out their acts. He added the challenges are there and the opportunities are also there.

He also introduced his staff members Oliver Fleming and Jake Cashwell to the Rotarians in attendance. He announced there will be an office opened in Elizabethtown to serve constituents and to answer questions. Congressman Pittenger said that the new office location has yet to be determined but the office hours will be Tuesday’s from 1 to 5 p.m.