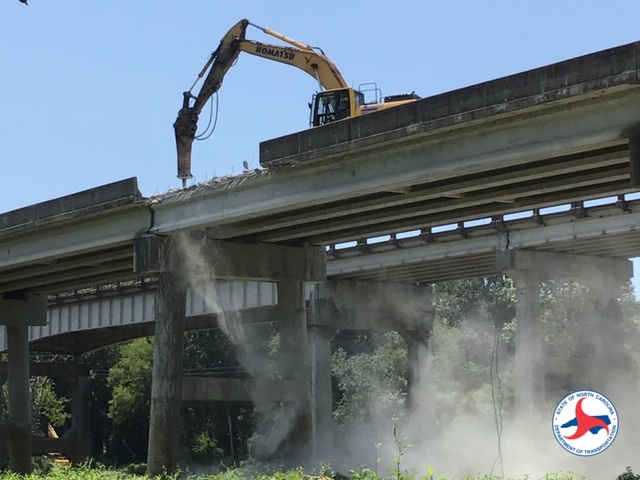 ELIZABETHTOWN – A contractor began today demolishing the U.S. 701 North bridge in Bladen County after the N.C. Department of Transportation recently awarded an emergency contract worth $4.9 million.

Smith Rowe LLC of Mount Airy is razing the two-lane bridge, which the NCDOT closed last fall after past hurricanes had damaged the substructure. The department has shifted the northbound traffic onto the adjoining southbound bridge, which operates in a two-way pattern spanning the Cape Fear River.

In addition to demolishing the bridge, the contractor will:

Repair soil erosion, known as scour, caused by past flooding around the bridge’s foundation; and

Remove an obsolete fender system once used for barges that is adjacent to this bridge.
The Federal Highway Administration has approved the NCDOT’s plan to replace the northbound and southbound bridges with a single, four-lane bridge, which will reduce maintenance costs and lower the risk of more damage by future flooding. The NCDOT plans to award a separate contract this fall to begin construction.

The bridge construction will be phased, meaning two lanes will be open for traffic in a two-way pattern throughout the project.

The FHWA has agreed to pay 80 percent of the estimated $29 million construction cost. The rest of the cost will come from the NCDOT’s highway trust fund. It will take about three years to complete the construction.