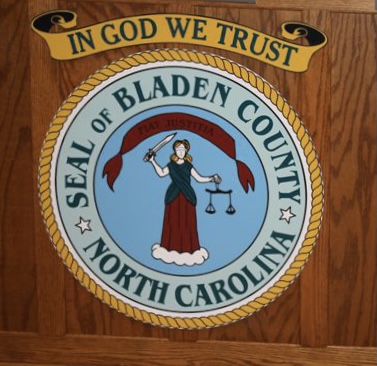 The Reverend Bruce Miller of Hickory Grove Baptist Church provided the invocation and County Manager Greg Martin led the attendees in the Pledge of Allegiance. The Consent Agenda was approved on an 8-1 vote, with Commissioner Munn-Goins voting nay.

Ms. Minnie Price came before the Commission to read the following statement, which she requested that Bladen Online publish verbatim: “For over ten years, my non-profit organization, which is Bladen County Youth Focus Project, Inc., and several other non-profit organizations have received charitable donations from the County. We accepted the amount given and no one complained.

“I am sure you have all have heard the old saying that one bad apple will spoil the whole bunch. Well, because George Michael Cogdell has a personal vendetta against me, he is trying to spoil one of the many good things for everyone that the county is doing to help its citizens.

“This program was instituted before George Michael Cogdell became a County Commissioner. I hope the Board will not let him destroy it. Thank you.”

Tax Administrator Renee Davis came to the dais to inform the Board that she has had a $2,500 bid on tax-delinquent property that was foreclosed in 2019; the taxes due are $3,600. On a motion by Commissioner Arthur Bullock and a second by Vice-Chairman Mark Gillespie, this bid was unanimously turned down.

Nathan Dowless, Emergency Services Director, requested approval of demolition bids on five properties under the Hurricane Florence Hazard Mitigation Grant program; the low bid for these five structures was $45,885 from D.G. Jackson Construction. This request was approved by unanimous vote.

Mr. Dowless then had an off-agenda item, stating that he has just been informed that the County has been awarded a $1,149,750 grant for a county-wide stormwater drainage study. He will bring this matter before the Board more fully at the March 15th meeting.

Health Department Director, Dr. Terri Duncan appeared before the Commission to request the temporary retention of two part-time Registered Nurses to provide Covid-19 vaccinations; the total cost to provide this service to the public will be $50,380.20. The Board unanimously and enthusiastically approved this action.

*   Deaths as a percent of positive cases

Dr. Duncan concluded her presentation by informing the Board that the County’s Coronavirus status has been downgraded positively, from the worst condition Red to the best condition Yellow; at this time, there is no condition better than Yellow.

Turning to Advisory Board Appointments, the Board unanimously approved appointing Tom Martin to the Airport Appeals Board and Ms. Soni Melvin to the Division on Aging Advisory Board. Other appointments will be considered at the March 15th Board meeting.

Mr. Martin started his presentation in the usual manner, with the activity calendar review for March to remind Board members of upcoming meetings and events of interest.

He then provided background information on the Nonprofit Grant Policy that was tabled for further study by a committee consisting of Commissioners named by Chairman Peterson during the last meeting; this committee met during the last week in February. The consensus of that committee was being presented at this meeting, and met with the approval of the entire Board by unanimous vote.

In Matters of Interest to Commissioners, Commissioner Reverend Cameron McGill stated that he has been approached numerous times since he was elected with concerns of road conditions, not only in his District, but throughout the county. He was directed to several NCDOT officials who may be of assistance.

The evening’s business having been concluded, the meeting adjourned at 7:05pm.

View the meeting on the YouTube channel linked below: