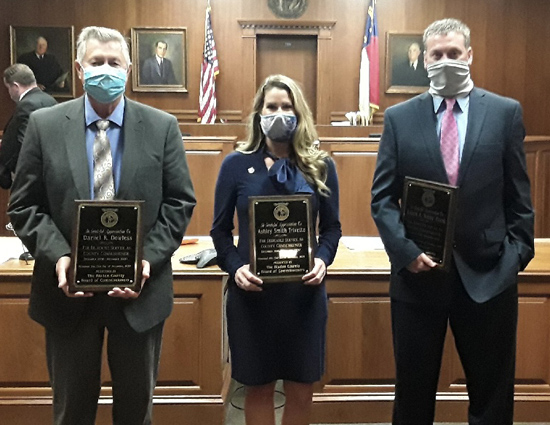 County Commission Honors Those Stepping Down

Reverend Cameron McGill from The Lake Church was present to provide the invocation, and young guest Zoey Smith led the Pledge of Allegiance.

Before approval of the Agenda, Commissioner Charles Ray Peterson proposed to add items 12-B, accepting property to be transferred from Bladenboro to the County for economic development purposes, and item 12-C, calling for an executive session for economic development. The Consent Agenda, to include the amended agenda, was unanimously approved.

Chairman Gooden asked Commissioners Ashley Trivette, Robby Priest, and Daniel Dowless (pictured above) to come forward. The Chairman read and presented plaques of appreciation that each of the outgoing Commissioners received for performing their duties admirably and in an exemplary manner for the people of Bladen County.

Their successors will be sworn in during the December 7th Board meeting.

At present, twenty-one homes have been assisted with ESFRLP2017 funds of $830,000; the latter loan program is ongoing. He informed the Board that the ESFRLP2021 application is in the final approval process.

Finally, he presented a contract for consideration for him to proceed with services for the administration of the ESFRLP2021 grant; this contract was unanimously approved.

Vickie Smith, Director of Social Service, appeared before the Board with a request for their consideration to approve a Memorandum of Understanding (MOU) covering all service programs except Medicaid with the NC Department of Health & Human Services for fiscal years 2020-21 and 2021-22 as mandated by the state. The MOU was unanimously approved.

The Department’s Lisa Nance then reviewed the Adult Medicaid audit report for the Board.

Health Department Director Dr. Terri Duncan came to the dais to request the Board’s consideration to replace two part-time Animal Shelter Attendants with a single full time position; this will create a greater continuity and will also save several thousand dollars of personnel costs; the Board agreed to this request unanimously.

Dr. Duncan then requested approval of a temporary part-time nursing position through a funding opportunity from RBC Tri-Care; the Commission also unanimously approved this request.

Turning to the Xi Jingpingfluena pandemic, Dr. Duncan first advised the Board that Bladen County has not been affected, nor infected, at the same rate as surrounding counties. Statewide, the 25-49 age group has been hit the hardest over the past year.

Ending on a bright note, Dr. Duncan informed the Commission that both Pfizer and Moderna are on the verge of perfecting a Covid vaccine that is 95% effective; and further, that Moderna has already submitted its drug to the Food & Drug Administration for approval. It should be noted that 95% effectiveness is a better effectiveness rate than current flu vaccines.

Finance Officer Lisa Coleman presented the County’s Financial Dashboard for the four months ending October 31st. All departments in all Funds have tightened their belts to weather the financial effects of the pandemic, and they are all under their the theoretical rate of 33.3% expended.

Conversely, revenues, while diminished from their normal levels, have not had the downturn anticipated; therefore, greatly lowered outgo versus a less lowered income level has generated an inter-year increase in the All-Funds Fund Balance of $4,564,209.

She also reviewed the revised Coronavirus Relief Fund, indicating total paid and planned countywide expenditures of $1,417,465; these funds include $50,000 for the county’s volunteer fire departments, as well as $332,909 in pass-through assistance to Bladen’s seven towns.

Ms. Coleman finished her report by stating that the Auditors were at her offices getting information for the 2019-2020 audit; she affirmed that the unofficial county-wide all-funds Fund Balance for last year looks to be in the $1.8 million range.

There was a bit of a conflict during advisory board appointments: Getting off to a smooth start, John Hemingway and Lennox Harrelson were unanimously reappointed to the Bay Tree Lakes Fire Service District.

The contention began when Commissioner Peterson moved to table approval of nominations for the Clarkton ETJ Advisory Commission and the Clarkton Fire Service District Committee, stating he needed time to review the nominees.

Following significant dialogue, the motion was seconded and passed by a vote of 5-3, with Commissioners Dr. Ophelia Munn-Goins, Michael Cogdell, and Arthur Bullock voting nay.

County Manager Greg Martin came to the podium to update the Board on those calendar items of interest for the rest of November and for December.

The Board went into Closed Session at 7:37pm for the purpose of hearing economic development information; coming back into open session at 8:07pm, they immediately adjourned.