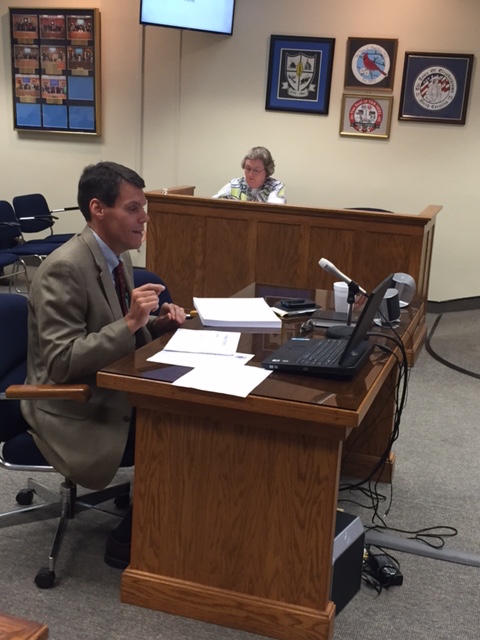 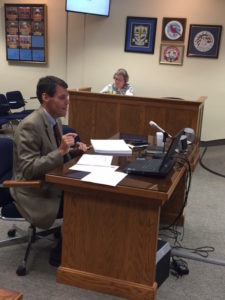 He told the board there are several positives regarding the budget.

“We are very fortunate that we are not in dire type of financial condition,” said Martin.

Martin said that the audited fund balance for 2015 was $10.2 million which is down about $1.5 million. He said two things caused the slight decrease—the additional funds that were issued to Bladen County Schools and the advance on the detention center project.

Martin said county staff anticipate being able to add to the fund balance when the advance for the detention center is reimbursed.

Martin said there are some challenges facing the county as well. He said that the county funds a small portion fo the health department’s expenses but the county staff anticipates that will change with the new budget cycle. Martin said that also the cost of capital and non-inventorable items will also drive the budget. Some of the items include optimal staffing for Bladen County EMS, new patrol vehicles for the sheriff’s office, tasers and radios for the detention center, trailer for Bladen County’s new training facility, among other items.

Martin said that many of the county’s departments had very few increases but the draft budget does include such things as the Parks and Recreation Trust Fund Grant the county has recently applied for and, if the application is funded, it would reflect about $552,000 increase to the Parks and Recreation budget. He told the board that Bladen Community College had submitted a request for a total of $1.4 million.

Martin told the board there are more capital items than the county normally has included in the budget. He reiterated that many of the capital items are one time expenses such as the PARTF grant.

Martin said the sales tax expansion comes about because of a new requirement where services are now charged a sales tax. He said it is projected the state will distribute $84.8 million to 79 counties. Bladen County is projected to receive $683,107. Martin said the legislature specified the funds must be used for public schools, community colleges and economic development.

Martin did tell the board there will be some additional operating expenses with for the new buildings to be constructed at Bladen Community College and an additional portion to fund two deputies to be stationed at the college.

Martin said the real challenge is related to employee compensation. He noted that the county has a pay study that is still in progress and the state health plan is increasing by about $116.13 per individual.

“The challenge is the needs and requests far outweigh the available revenues,” said Martin.

He told the board it was important to come before them with some specific numbers and he and staff had incorporated numbers into a working document.

“We still have some work to do over the course of the next couple of weeks,” said Martin.

After further discussion it was decided, to move forward with scheduling small group meetings to discuss specific budget concerns.