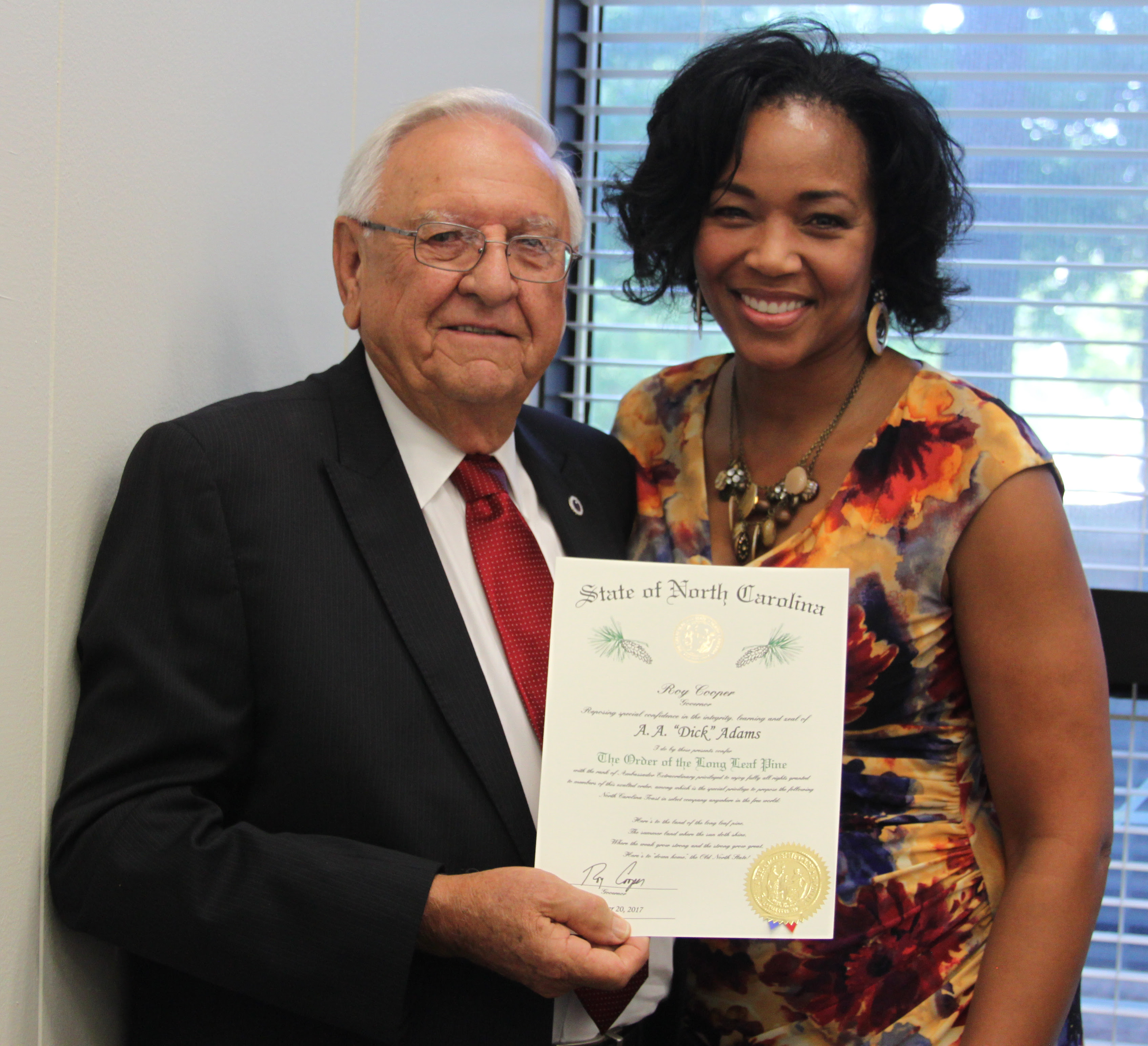 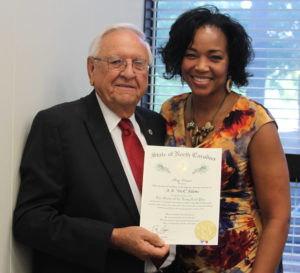 RALEIGH – For the first time since it was created in 1987, the state’s Crime Victims Compensation Commission soon will have a new chairperson. Dick Adams, who has chaired the Commission for the past 30 years, retired after today’s quarterly meeting.

Adams, who has been involved with crime victim rights since the murder of his son, Richard, in 1982 during a robbery, was honored by the Commission and the state of North Carolina prior to the meeting. He received the Order of the Long Leaf Pine, the state’s highest civilian honor, from the Department of Public Safety Chief Deputy Secretary for Administration Casandra Hoekstra. Victim Services Director Janice Carmichael also recognized Adams.

“I have known Dick for 17 ½ years and he never missed a Commission meeting,” Carmichael said. “After the loss of his son, he devoted his life to help victims at the state and national levels. Very seldom do you see the type of dedication Dick showed for any board meeting. He’d talk to any legislator and drive from Bath to Raleigh when the legislature was in session.”

“I’m limited in wisdom and knowledge, but I devoted time and resources to do the best I could,” said Adams, who left a job in middle management at Dupont in Kinston. “I fell far short in many ways. I can’t say it’s been a pleasure (to serve) but it has been a privilege to participate in this program for so many years.

“It feels good to know there’s been enough support from people who reappointed me. Whether I did a good job, bad job or no job, I’ve done it to the best of my ability.”

After the death of his son, Adams went on to co-found the North Carolina Victim Assistance Network, a volunteer organization that helped give crime victims a voice in North Carolina. The NCVAN helps educate the public about the impact that crime has in society, as well as assist crime victims. Adams said NCVAN provides a voice for crime victims at the General Assembly.

“Dick has a heart for victims,” said Commission Vice Chair Tammy Huffman West, who is a victim advocate in Catawba County. “He’s very passionate. I don’t know if anyone can come in can fill his position, but we’ll move on. He’s one of a kind.”

Said Adams, “Most of the people who benefit from this program say it helps them relieve the stress and strain on the debt put upon them. The money victims receive helps pay service providers. Few dollars actually go to victims. Most go to hospitals and the undertaker. “

Adams said as he leaves the Commission, he remembers the opening line of the Emily Dickinson poem, “If I Can Stop One Heart From Breaking”:

If I can stop one heart from breaking,

I shall not live in vain.

“I think I helped some and failed more,” he said. “I didn’t choose this path. It chose me. We all have a mission.”