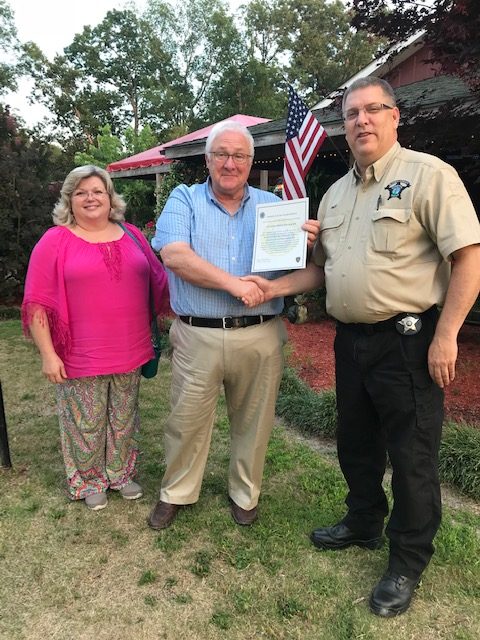 Elizabethtown  resident, Mr. Dan Allen, the only remaining participant in the Bladen County Sheriff’s Office Citizen’s Academy was awarded his Certificate of Completion last night (5-15-2019).  Other candidates had dropped out of the classes, but Mr. Allen persevered and completed over forty (40) hours of law enforcement training since January 7th this year.

Mr. Allen participated in classes with a focus on basic law enforcement  operations,  Constitutional, statutory,  and relevant case law, use of force, range operations, detention, communications, pursuit and precision driving,  drug awareness, gang awareness,  and other important law enforcement issues. He spent two evenings on actual patrol with our uniformed division and was able to see operations from the inside.  He participated in classes hosted by the BCSO Specialized Training Unit where guest speakers presented important information, including a survival presentation from NC State Trooper Harry Stegall that was shot seven times and left for dead on the side of the road.

Mr. Allen completed the course and was given a Certificate of Completion by Sergeant Gary Turlington and Sergeant Barry Pait. In the contributed photo are Mrs. Sunday Allen, Mr. Dave Allen and Sgt. Turlington.

Mr. Allen will participate in future events and programs as a civilian volunteer to assist in the enhancement and betterment of our service to the community, according to the Bladen County Sheriff’s Office.

Additionally, Mr. Allen will serve as a volunteer liaison in the county and abroad.

“His dedication and participation is greatly appreciated,” Sgt. Turlington said.