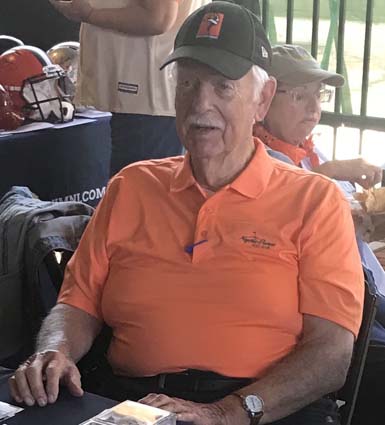 SCOTTSDALE, AZ – Less than one week before the coronavirus shutdown Major League Baseball’s Spring Training, I was fortunate enough to attend my first spring training game.

A baseball fan since 1961 when my father and grandfather presented me with a Norm Cash autographed bat and a Roberto Clemente glove (look those guys up – they both won batting titles), I started following baseball when there was only a single Baseball Game of the Week that was televised on Saturday afternoon.

In the 1960’s and early 1970’s, World Series games were played in the afternoon. I can remember sprinting a quarter-mile from the school bus stop to catch the final 2-3 innings of the final 2 games of the 1968 Series when Cash’s Tigers rallied to beat the St. Louis Cardinals and their star pitcher Bob Gibson.

Following your favorite team on a daily basis in the early 1970s was limited mostly to AM radio stations – usually on a car radio. The Braves became a national broadcast on owner Ted Turner’s TBS in 1973, and the Cubs followed suit in 1981 on WGN, but you still had to have cable to watch them.

While working for the Southeastern Times in the mid-70s, I had the opportunity to interview major league pitcher Gaylord Perry (pictured, above) who was in Clarkton at E. J. Cox Co. doing a promotion for a farm equipment company. At the time Perry was pitching for the Texas Rangers, but had already won the 1972 Cy Young Award while pitching for the Cleveland Indians.

Perry who was continually accused of doctoring the baseball had just released his autobiography ‘Me and the Spitter’ but when I interviewed him in Clarkton he wouldn’t talk about the pitch. He would change the subject if it came up. Don’t know if he was protecting trade secrets, selling books or what.

My memories of that interview were that Gaylord was a very big man – listed at 6-4 he seemed more like 6-6 – and very accommodating to spend time with a 21-year-old reporter for a bi-weekly newspaper.

Finally in the late 1980’s I made it to my first major league game in Atlanta and have since attended a number of major league games mostly in Atlanta, many in Philadelphia, and a few in Washington and Baltimore. I never got to see Perry pitch in person.

But I was lucky enough to watch Andre Dawson clobber 2 home runs in one game in Atlanta, see Barry Bonds homer and Bobby Cox get ejected in the same game, and watch Cal Ripken, Jr. and Mark McGwire wallop home runs in Baltimore.

In the mid-90s I was in Veterans Stadium in Philadelphia when Curt Schilling pitched a 2-hitter and struck out 11 Mets to eclipse the 300 mark in strikeouts for a season. On another cold, rainy night in Philadelphia, I was able to move down to the 2nd row directly behind home plate and watch John Smoltz strikeout the side in the 9th to save a Braves win (all the Phillie fans had left).

But I had never been to spring training until this season. The opportunity came about because my wife was attending a medical conference in Phoenix, and while she was in class I went to the Indians/Giants spring training game.

I tried to get there in time to see some workouts on the back-fields at the Giants facility in Scottsdale, but the last groups of players were walking off when I got there. I circled the park and was killing time before going to my seat when I looked across the concourse and spotted Perry and Cincinnati Reds slugger George Foster seated at a table.

Walked over and shook hands with Perry and told him that I had interviewed him in the mid-70s in Clarkton. “That’s been a while ago,” drawled the 81-year-old Perry with a grin. We talked a bit about Ranger pitcher Len Barker who was also discussed in that earlier interview but not about the ‘spitter’.

Perry and his older brother Jim were basketball and baseball stars at Williamston High in Martin County. They won a state championship in 1955 with both of them pitching shutouts in the championship series.

Gaylord won 314 games and ranks 8th on the all-time MLB strikeout list with 3,534 career strikeouts. He won Cy Young Awards with Cleveland in 1972 and San Diego in 1978. He was inducted into the MLB Hall of Fame in 1991.

Foster was a key member of the Big Red Machine championship teams in 1975 and 1976 and won a Most Valuable Player award in 1977.

I found that spring training games are laid back and there are a lot of older guys like me in attendance. An Indian fan from Toledo sat next to me and shared that he had played on an amateur baseball all-star team with Jim Leyland who managed the Marlins to the 1997 World Series Championship.

Orlando Mercado blasted a 400-foot home run to put the Indians up early then was injured diving to catch a sinking liner in center field just an inning later. Brandon Belt homered for the only Giants run. It was still a 2-1 game until the starters left after the 6th inning, and the Indians Triple-A players pulled away for a 7-1 win.

But the best thing about spring training was to sit in 84-degree sunshine and watch baseball again. Little did I know that 6 days later it would all come to a halt.

One tidbit I learned after returning home was that Gaylord was also involved in the Pine Tar incident between the Royals and the Yankees in 1983, his last season. When his teammate George Brett was called out for hitting a home run with a bat with too much pine tar, the wily Perry grabbed the bat and headed for the clubhouse to hide it. Guess Gaylord knew all the tricks about dealing with substances on balls and bats.

More from SportsMore posts in Sports »