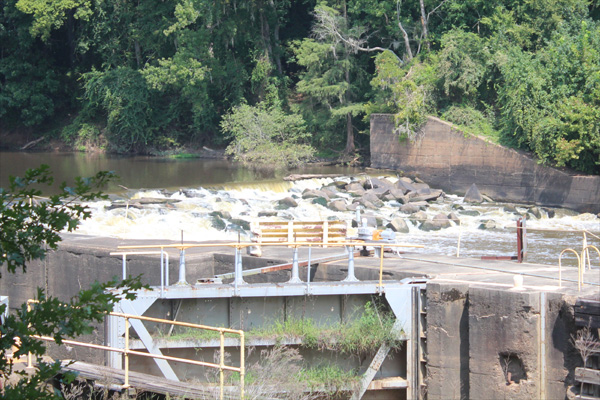 What began as project to fill a scour hole at the William O. Huske Lock and Dam No. 2 created during Hurricane Matthew, has been plagued with numerous delays and is facing still more delays due to high water on the Cape Fear River. The Lock and Dam No. 2 has been closed to the public while work was taking place for more than one year and no estimated completion date is available.

Lisa Parker, a spokesperson with the US Army Corps of Engineers, said the project has been shut down for several weeks since Hurricane Florence due to high water on the Cape Fear River.

“There has been an ongoing issue with the elevated water level in the river. The contractor is waiting on the water to go down,” said Parker.

She said the project is 70 percent completed. With rain in the forecast for the weekend and early next week, Parker said the river will remain elevated for at least another week.

Elizabethtown Assistant Town Manager Pat DeVane said, “Because of the high water in the river, the contractor is not operating. Their equipment was flooded during Hurricane Florence.”

DeVane added there was a lot of damage to the equipment being used to work on the project including a barge that was lost. He also estimated about three feet of water entered the lock master’s house. He said the town of Elizabethtown cannot do any work there as the Corps of Engineers currently has possession of the property.

“They have not turned it back over to us for us to be able to do an assessment,” said DeVane.

Parker said the contractor will resume work at the Lock and Dam No. 2 when the waters have receded. She did not give an estimated completion date.