The 8th annual Back-to-School camp is free and open to ages 6 to 18. 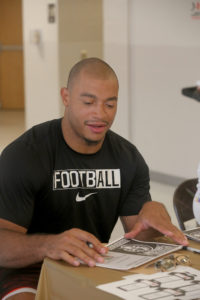 The camp will begin at 8:30 a.m. and last until 12:30 p.m., but campers are asked to be on site by 8 a.m. for registration. A parent or guardian must be present for a child to register.

Bryant, who played collegiately at Harvard after graduating from East Bladen in 2004, played seven years in the NFL. He spent 2009 through 2012 with the Oakland Raiders, then signed a five-year, $34 million contract with the Cleveland Browns. He played three seasons with the Browns before being released.