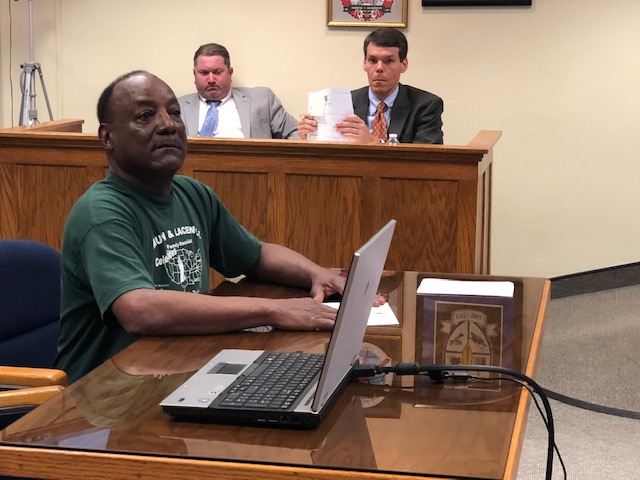 Bladen County Board of Commissioners met last Monday, May 6 for a regular meeting. On the agenda were budget requests from Bladen Community College and Bladen County Schools.

Before the college and the school items were recognized on the agenda Mr. Horace Munn with the Town of East Arcadia addressed the Bladen County Board of Commissioners as an individual wishing to address the commissioners.

Mr. Munn distributed a packet of information to the commissioners before he began his presentation.

He said, “I was here two months ago on behalf of East Arcadia. Since that time I have requested documents from Bladen Community College about the East Arcadia Center. I received most of the documents and some I did not receive.”

The commissioners shared the paperwork distributed as Mr. Munn referenced a document he said was dated in 2004.  He lead the commissioners to the document he said was a “contractual agreement” stating the work done on the campus in East Arcadia was the owner’s responsibility. The owner is the college, Bladen Community College not the Town of East Arcadia, Mr. Munn explained as he referenced the paperwork.

“The reason I bring you these documents is because this is my last ditch effort for the college, the county, and East Arcadia to operate in good faith,” Mr. Munn said.

Mr. Munn listed damages the center at East Arcadia had received. Damage was repaired to the roof, walls, and the floors have been cleaned, according to Mr. Munn. The only thing left is the siding. “All we are asking is for the college and the county to do what is right,” Mr. Munn said.

Chairman of the Board of Commissioners said, “I have a question for you Mr. Munn, why when y’all signed the last contract, you didn’t require BCC to be responsible for the building? The last contract did not hold BCC accountable for repairs.”

“We were operating in good faith,” Mr. Munn replied.

“If we had a contract for 20 years with it in there I wouldn’t have signed a new contract without it in there,” Mr. Peterson objected.

Commissioner Arthur Bullock asked if the repairs needed were only to the exterior of the building.

Mr. Munn told the commissioners Bladen Community College has made all repairs requested except for the vinyl siding on the building.

Commissioner Ray Britt stated he also is a BCC Board of Trustee member. Mr. Britt in response to Mr. Munn’s request, “The repairs were done based upon the last lease agreement. The college has abided by the lease agreement.”

Mr. Britt said, “The college feels they have honored the lease agreement.”

Commissioner Dr. Ophelia Munn-Goins asked Mr. Munn, “Have you gone to the President of the College and the Board of Trustees?”

Mr. Munn replied, “We have sent a letter, but no one has responded.”

Commissioner Michael Cogdell spoke about the damage to the building in East Arcadia he examined a couple years back and his discussion then with the past BCC President, Dr. Findt. Mr. Cogdell said he was under the impression the college would be paying for the repairs to the center after his conversation with Dr. Findt.

“It goes back to the President of the community college and the Board of Trustees to do what is right,” Dr. Munn-Goins said firmly while looking at Mr. Dennis Troy, the Bladen Community College Board of Trustee President, who was in the audience.

“I won’t be coming again. Thank you for your time,” Mr. Munn said ending the presentation.

Mr. Cogdell asked Dr. Lee if there were any college satellite campuses.

Dr. Lee explained the college did not have any satellite campuses, but in the past did have centers.

“We did have the East Arcadia center and that was the last center,” Dr. Lee said.

When Dr. Munn-Goins asked Dr. Lee if Mr. Munn with the Town of East Arcadia had contacted her, Dr. Lee answered. Mr. Munn had his lawyer contact the college’s lawyer, Gary Grady.

The discussion on the center at East Arcadia ended.

Budget increases were discussed by Dr. Lee with BCC. Next Dr. Robert Taylor with Bladen County Schools address the commissioners about budget increases as well.

The Bladen County Commissioners decided to meet again on Tuesday, May 14 at 9 a.m. to further discuss the budget for the next fiscal year. Watch the meeting with the budget requests on the county’s YouTube Channel.

East Arcadia has building with needs and great possibilities