The man who was the focus of a months long investigation by the NC State Board of Elections into election fraud in Bladen County was released on bond Thursday just one day after being indicted by a Wake County Grand Jury.

“I told McCrae (Dowless), ‘I’m going to tell you just like if you were my son, if you have done something wrong, you’ve got to face up and accept the consequences and deal with it.’ At the same time, I am also part of those who believe you are not guilty until proven guilty,” said Britt. 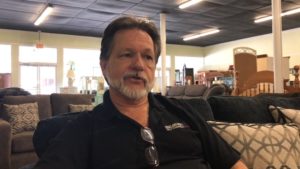 He said the purpose for posting the bond was to allow Dowless’ attorneys to be able to meet with Dowless and work with him to learn what happened.

Britt is a former member of the Bladen County Board of Elections. He served on that board for 16 years.

“I took a personal interest in it because my name had appeared two or three or four times due to the meeting in my store. My experience on the Board of Elections has led me to do what I did yesterday (Thursday) for some people that were really concerned too,” said Britt.

“We stayed very involved with Mr. Dowless through this whole process for the simple fact, not interfering with the State’s investigation, but, mind you, with our names being mentioned, we were trying to be concerned and find out what are you (the investigators) talking about with harvesting absentee ballots.”

Britt said Bladen County has been in the news for the wrong reasons.

“Bladen County is a good county. It’s got a lot of good people. We have been tainted. We have been, as far as I am concerned, abused and this has drawn national attention,” added Britt.

He also explained the meeting, that took place at his store Ray’s Furniture and Jewelry Liquidators between Mark Harris, Pat Melvin, McCrae Dowless, himself and Walter McDuffie. Britt said he received a telephone call requesting to use the store for a meeting and Britt said he agreed. Britt explained that the store is an easy location for people to find.

“I was like sure, it’s no problem because I would like to meet Mr. Harris myself,” said Britt.

He said he was in and out of the meeting waiting on customers that came into the store.

Dowless was hired by Republican candidate Mark Harris to help with his campaign for the  9th Congressional District. Harris testified at the evidentiary hearing conducted by the NC State Board of Elections last week that Dowless discussed his absentee ballot “program.”

“It was more of a casual visit and welcome to Elizabethtown and we appreciate you for coming,” said Britt.

After the evidentiary hearing ended, the NC State Board of Elections voted unanimously to conduct a new election of the US Congress District 9, Bladen County Commissioner District 3, and Bladen County Soil and Water District Board.

“Well, I won and I’ve got to run again,” said Priest. He added he doesn’t completely understand the situation and why his race was affected.

A message left for Wayne Edge who ran against Priest in the November election, was unreturned as of press time. During the investigation into the voting irregularities, Edge submitted a letter to the NC State Board of Elections ceding the Bladen County Commissioner District 3 election to Priest.

The NC State Board Elections Spokesman Patrick Cannon said the margins of victory were so close in the Bladen County Commissioner District 3 race and the Bladen County Soil and Water District Board that the board felt those races could have been impacted by the fraud that occurred in the 9th Congressional District race.

The NC State Board of Elections is scheduled to meet at 1 p.m. Monday and set a date for the new primary and general election and to consider appointing the new members to the Bladen County Board of Elections.