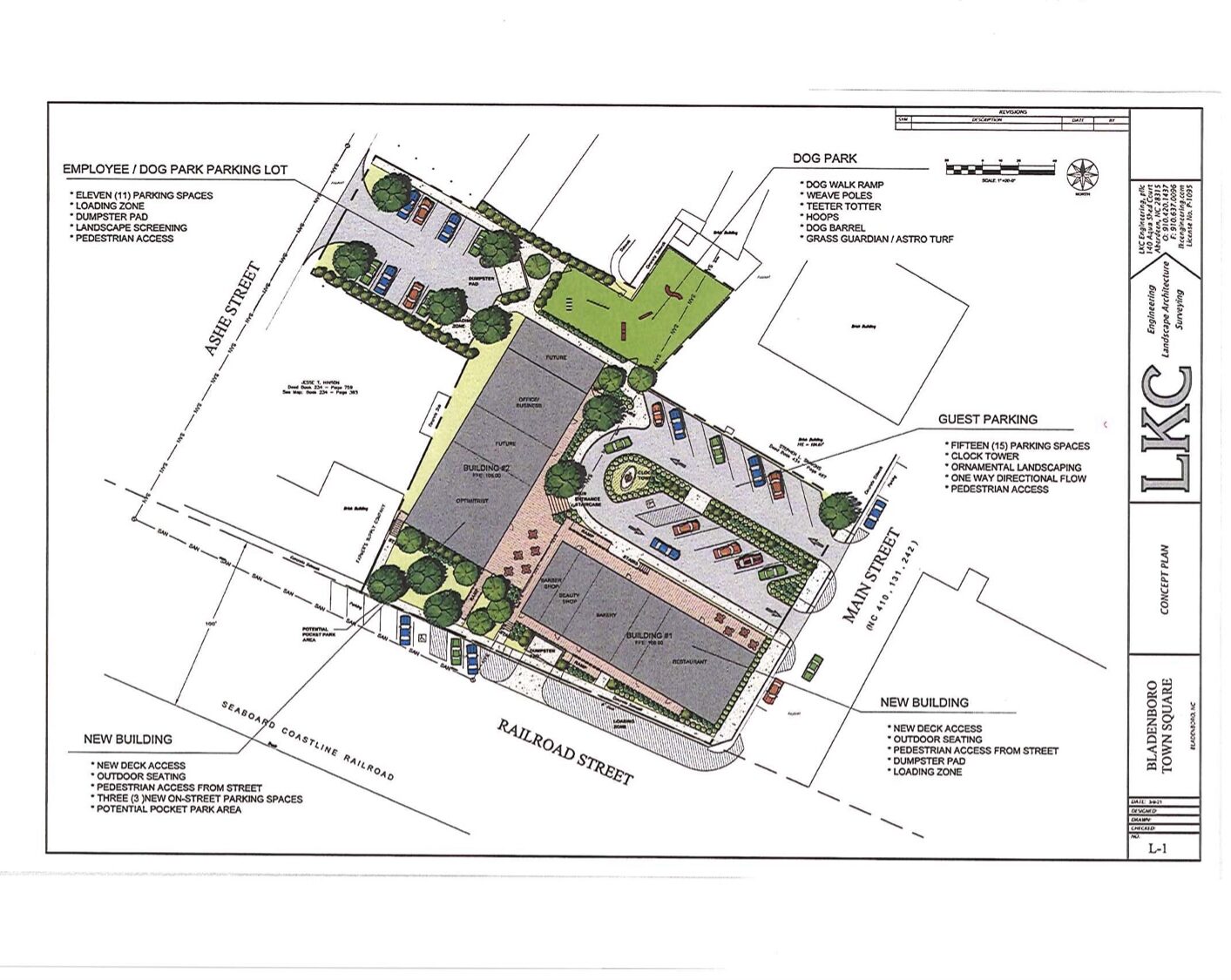 The quest to re-imagine and redevelop Bladenboro’s central business district around the intersection of Main Street (NC410/131) and East Martin Luther King Jr. Drive/West Seaboard Street (NC211 Business) has been envisioned since before even the downtown destruction of Hurricanes Matthew and Florence.

Several buildings on Seaboard, most notably the Fowler-Simmons building and the Jabco building, as well as the old Hester Optometry building on South Main, were dilapidated and abandoned eyesores, needing a dollop of Benjamin-green Visine.

The first idea had been to pursue grants to remove those dilapidated structures. In mid-June 2019, this reporter, then Bladenboro’s Administrator, wrote a letter to State Representative William Brisson, seeking demolition funding from the legislature; Mr. Brisson’s response was $200,000 in legislative demolition funds.

But it was soon determined that the major traffic flow through town was along Main Street. When the fog of indecision lifted, the new vision was a business complex beside The Medicine Shoppe, strip-mall fashion, facing into the parking lot there.

This would still require razing the Hester Building in any case but, of course, leaving the others standing along Seaboard.

In partnership with Chuck Heustess, Executive Director of the County’s economic development arm Bladen’s Bloomin’, plans for the new concept hit the drawing board. Well, that is until it was realized that the structure would have to be raised a couple of feet to meet FEMA’s National Flood Insurance Program mandates.

Once more to the drawing board.

Back at the ranch in the meantime, and with a certainty that the Hester Building would have to come down in any event, plans were developed to proceed with ridding Main Street of that downtown blemish; demolition occurred in August 2020, at a cost of $21,950, leaving $178,050 for other demo projects.

Heads came together – and were scratched – while brainstorming something that would not only be creative, but innovative as well. With cries of “aha” and “zounds” and “voila,” a light bulb of supernova proportions burned brightly over their heads.

It was already known from very recent experience just how low Main Street’s intersection was with Seaboard/MLK. Bringing out rulers and yardsticks and floodplain plans, Mr. Heustess and his cohorts studied how flood-prone the properties at the Railroad Street end of downtown Main Street were.

Lo and behold, this end of downtown was relatively high and dry by comparison. And on top of that, the properties on the west side of the street were already dilapidated and abandoned.

Ideas abounded; plans were plotted; property owners were contacted by Bladen’s Bloomin’ and asked to donate their buildings and/or land in return for generous tax write-offs.

Bladen’s Bloomin’ then took title to the Edwards Pharmacy building and the Hickman Insurance building, plus five interior properties currently used only for parking.

To get the ball rolling, last December, the Town accepted from Bladen’s Bloomin’, those seven tracts of real property along and behind the west side of South Main Street from Railroad Street to the old Housing Authority office.

They augmented the previous donations of the park property on South Ash Street by Boost the Boro and, with the gracious consent of Executive Director Stevie Craig, the old Housing Authority building.

And speaking of donations, Representative Brisson’s office announced last December that through the efforts of Administrator Oryan Lowry, the legislature has provided an additional $300,000 for downtown demolition activities.

After deducting the $21,950 already used to level the Hester building, this has made available $478,050 in demo funding.

So the Town then very quickly advertised for demolition bids and, at its March 8th meeting, awarded a demo contract to Hickman Utilities of Bladenboro, the low bidder, for $109,350. As of this writing, asbestos abatement has been completed; the actual demolition activity should be commencing shortly.

Not standing still, a conceptual plan has been draw up by LKC Engineering and is enclosed with this article. Also, merely conceptually, are the two single-story buildings in the New Town Square; Elevations and floor plan concepts are also included.

Economic Development Agency grants are being pursued even as the demolition proceeds. With a “very high probability of grant reception,” according to sources, final plans and construction specifications will be prepared as soon as EPA’s approval to proceed is received.

So, after years of nail-biting and teeth-gnashing, it would appear that Bladenboro is about to get its downtown business district back.

Tags: Downtown Redevelopment has been a Moving Target