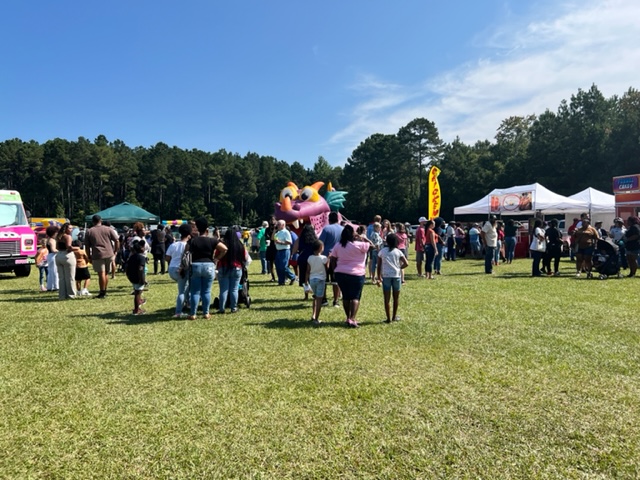 About 30 years ago, the Dublin community came together to pull off a festival celebrating one of Bladen County’s cash crops, the peanut. According to event organizers and supporters, this past weekend, the annual Festival drew one of the largest crowds in its history.

To kick the event off, the streets lined with on-lookers while beauty queens, clowns, community helpers, entertainers, and politicians paraded through the downtown. “Bladen County’s Best Television News Reporter”, Ms. Francis Weller with WECT was the parade’s Grand Marshal.

According to Vicky Sibbett, chair of the DPF committee, there were 15 food vendors and 70 other vendors participating in the event this year.

The lines were long for the popular festival foods and drinks. Many of the vendors were pleased with the turnout.

Cory and Jennifer Russ with Southern Son Designs said it was a very profitable day for them with their custom wood signs and flags. There were handmade ornaments, clothes, blankets and educational information also offered by the different vendors.

Homestead Christian School showcased its curriculum at one vendor space while the Republican Party members Wayne Schaefer, Jane Pait and others handed out copies of the Constitution to help celebrate Constitution Day.

Political candidates with tents and decorated vehicles in the parade were shaking hands and hugging babies. Some of those participating were Hakeem Brown, Cristin Hursey, and Althea Weaver. Brown and Weaver said they were pleased with the opportunity to speak with so many of their constituents during the Festival.

“”We mixed it up this year,”” Sibbett stated, “”and moved the stage further down so more people could see the bands. People really enjoyed it, and some have said this is the biggest Festival they have seen in years.””

The Pink Slips Band, a local group, drew fans to close out the event. Lead singer Townsend Link was happily surprised by the number of people in attendance. “”We had fun and look forward to playing in a couple of weeks at the Cape Fear Vineyard.””

Today the DPF committee posted on their social media, “”The Dublin Peanut Festival committee wants to thank each and every sponsor, vendor and attendee of this years 30th annual Festival. Because of you this was a successful Festival for the Town of Dublin and Bladen County. Again thank you and we will see you all next year!””

Sibbett added she would like to see more volunteers to help with the event. For more information, contact a committee member or visit their website at: https://www.dublinpeanutfestival.com

Tags: Dublin Peanut Festival Draws One of the Biggest Crowds in History