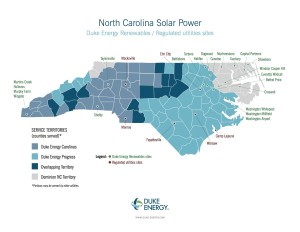 The solar farm at the DuPont site will generate about 23 megawatts of electricity.

“It began producing electricity for the grid in December. It is one of our larger projects,” said Wheeless.

“We are continuing to expand our solar portfolio,” said Wheeless.

Currently there are 23 solar facilities in the state, according to Wheeless.

He added that solar is a very alternative energy source in North Carolina. Wheeless said North Carolina is fourth in the nation in solar power.

He said wind turbine projects are not on the radar for Duke Energy in North Carolina. Wheeless said wind farms are more popular in the Midwest.

Wheeless another project Duke Energy is involved with is a potential nuclear power generating plant.

“We have a site in South Carolina in Cherokee County that we have identified as a possible nuclear site in the future,” said Wheeless.

He stressed the project is in its infancy and is still going through the necessary permitting processes. Wheeless added that a nuclear power generating plant is a major investment.