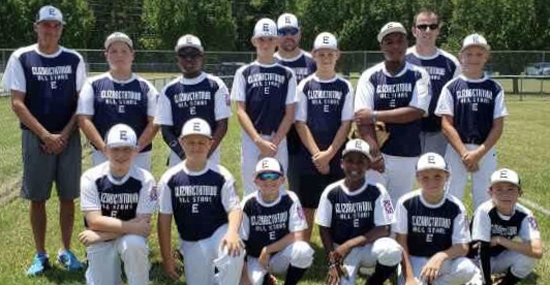 CLARKTON – Elizabethtown battled back from an early 4-1 deficit to defeat Columbus County 10-6 Tuesday night and advance to the championship game of the Dixie Youth Baseball District 2 Majors Supplemental Tournament.

Elizabethtown will play unbeaten Whiteville on Wednesday at 6:30 p.m.

A first inning run edged Elizabethtown ahead 1-0. Cole Butler was hit by a pitch and scored on Colton Daly’s sacrifice.

After Columbus County scored four runs in the second inning, Elizabethtown answered with two runs in the third inning. Collin King was hit by a pitch, Kewone Maynor reached base, and Butler ripped a single to center field that scored King and Maynor.

Marcus Williams ignited Elizabethtown’s four-run fourth-inning rally with a double to left field. Conner Smith knocked in Williams with a triple, and Tredon Scott yanked a hit to left that scored Smith with the tying run.

Columbus County whittled the final margin to 10-6 with a pair of fifth inning runs.

Butler batted 2-for-2 with a double, three runs batted in and a run scored to lead the Elizabethtown hitters. Maynor tripled, scored twice and drove in a run. Smith and Sasser both tripled, and Daly and Williams slugged doubles. Dove, Scott and Cashwell added one hit each.

Daly drove in two runs, and Smith, Scott and Sasser had one RBI each. Dove, Williams, Smith, Scott, Sasser, King and Cashwell scored one run each.