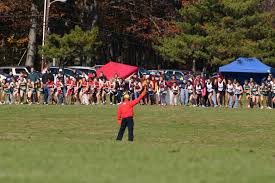 The East Bladen Eagles is now offering Cross Country teams to their students. The teams have already had some meets. There is a boys’ and girls’ team for runners.

We spoke with Cross Country Coach Bolden who gave us the meet scores from the past few meet.
At the Four County XC Meet in Pender on September 22nd the Eagles ran with pride crossing the finish line at respectable times.
Dawson Jessup was the first Eagle to finish the race with a time of 22:42 and Marley Ketterer was the first lady Eagle to finish the race at 27:56. Cameron Sessoms finished in 25:48, Hunter Clark finished in 29:38, Tatyiana Graham finished in 30:44, Caila Johnson finished in 31:18, and Karbarah Moore at 40:42 and Tyasia Graham at 40:43 were just a second apart finishing the race for the Eagles.
Clinton, Hobbton, Midway, Pender and Union High Schools were all represented at the meet as well.
East Bladen did not score high enough to place in the top three, but they are practicing to do better at each game according to some of the players.
Share on social media using short code link: https://bladenonline.com/?p=27339
Share: