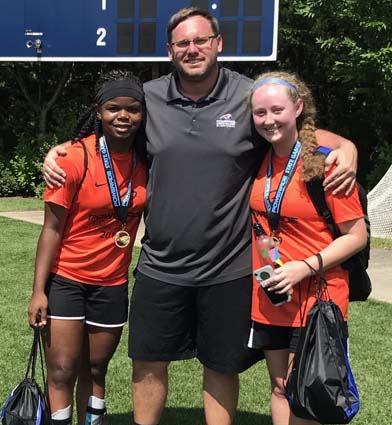 McDonald scored three goals and Evans played in the midfield as the East posted a 3-0 record. McGill, who is currently coaching at Ashley High in Wilmington, served as the head coach of the East team.

Whiteville’s Olivia Smith and Claire Smith were also members of the East team. “It was cool seeing our Three Rivers Conference girls play together,” said East Bladen soccer coach Jay Raynor. “They all had great weekends and played extremely well.”

Raynor served as the Competition Manager for the Games. It was his third year in that role. East Bladen soccer players Brian Monroe, Malcolm Bolden, Robert Fletcher and Nelson Sarmiento served as field marshals and handled the game day operations.

“The weekend went smooth due to these guys,” said Raynor. “We couldn’t have done it without them. “

Raynor continued, “It was awesome watching Hastin coach and guide his girls to the Gold Medal. It wasn’t long ago he was helping me as well as participating in the Games. Now he is coaching and winning Gold Medals. It has all come full circle for him and that’s pretty cool.”

Raynor concluded, “It’s pretty cool to see the impact our East Bladen soccer program has had on the Powerade State Games, especially this year. At every level of the competition a member or alumni of East Bladen soccer had a role.”

About 20 college coaches came out to watch and scout the soccer events.