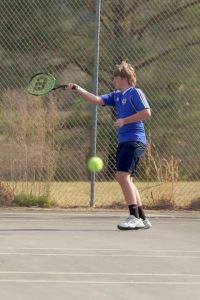 Meggs and the East Bladen doubles team of Michael McDuffie and Gabe Barnes along with West Bladen singles player Tate Sykes all advanced to the Mid-East Regionals in Goldsboro next Friday, May 5th.

In first round singles play, East Bladen’s Alex Gomes defeated West Bladen’s Edgardo Lara 8-4 to advance to the semi-finals where he lost 8-1 to eventual champion Zach Darden of Clinton.

Meggs defeated Clinton’s Rick Daughtry (CHS) 8-3 in his opening round match. In the semi-finals Meggs outlasted Sykes in a 7-5 tie-break to advance to the finals where he lost to Darden 8-1. Sykes defeated Gomes 8-1 in the match for third-place to qualify for the Regionals.