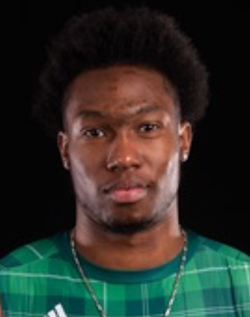 GREENVILLE, SC – Mount Olive junior Eian Hines was named the Conference Carolinas Field Athlete of the Week for his performance Saturday in the Roanoke Invitational in Salem, VA. It was the second time this season that Hines has received this honor.

Eian Hines won the both the long jump and the triple jump on Saturday. The East Bladen grad set an NCAA provisional mark in the long jump with a leap of 7.20 meters (23 feet, 7.46 inches) That leap is currently 18th best in Division II this season and the best of the year in the Conference Carolinas.

Earlier this season Eian Hines received Field Athlete of the Week honors for his performance at the JDL January College Kick-off in Winston-Salem on Jan. 21st where he finished 2nd in the long jump with a leap of 7.12 meters (23 feet, 4.5 inches).

Eian Hines placed third in the triple jump in the JDL Kick-off with a total jump of 14.37 meters (47 feet, 1.75 inches). Ethan Hines was fifth in the long jump at the JDL.