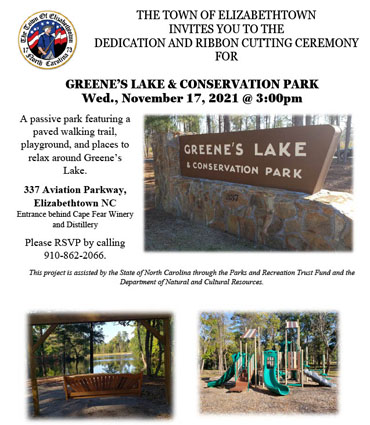 Elizabethtown Town Council met Monday evening to conduct their regular monthly business. In July 2021, the decision was made by the Council to undertake a Street Rehabilitation/Improvement Project. In August, Council authorized the filing of an application to the NC Local Government Commission for approval of financing agreement for the project with approval granted by the LOC. Council approved the financing for the project and authorized delivery of the various loan documents to First Bank. The $2 million loan is for a term of 15 years at a 2.15% fixed interest rate.

Mayor Campbell proclaimed that in observance of Veterans’ Day, November 11th, “the Town proudly joins the rest of the nation to salute and give special honor and recognition to the men and women who are serving or those who have served to preserve the principles of Justice, Freedom, and Democracy.” In addition, the Town also recognizes November 8-12th as “Employ A Veteran Week” and urge the employment of veterans by all businesses during the month of November.

As requested by the Elizabethtown Optimist Club, the Town proclaimed the second week of November as “Youth Appreciation Week. Councilman Ricky Leinwand stated that “the accomplishments and achievements of these young citizens deserve the recognition and praise.” The Town joins Elizabethtown Optimist Club in expressing their faith in the ability of today’s youth as they assume responsible roles in the future of mankind.

The Greene’s Lake and Conservation Park Dedication event will be held on November 17th at 3:00 p.m.

The Elizabethtown Christmas Parade is scheduled for Sunday, November 28th at 3:00 p.m.