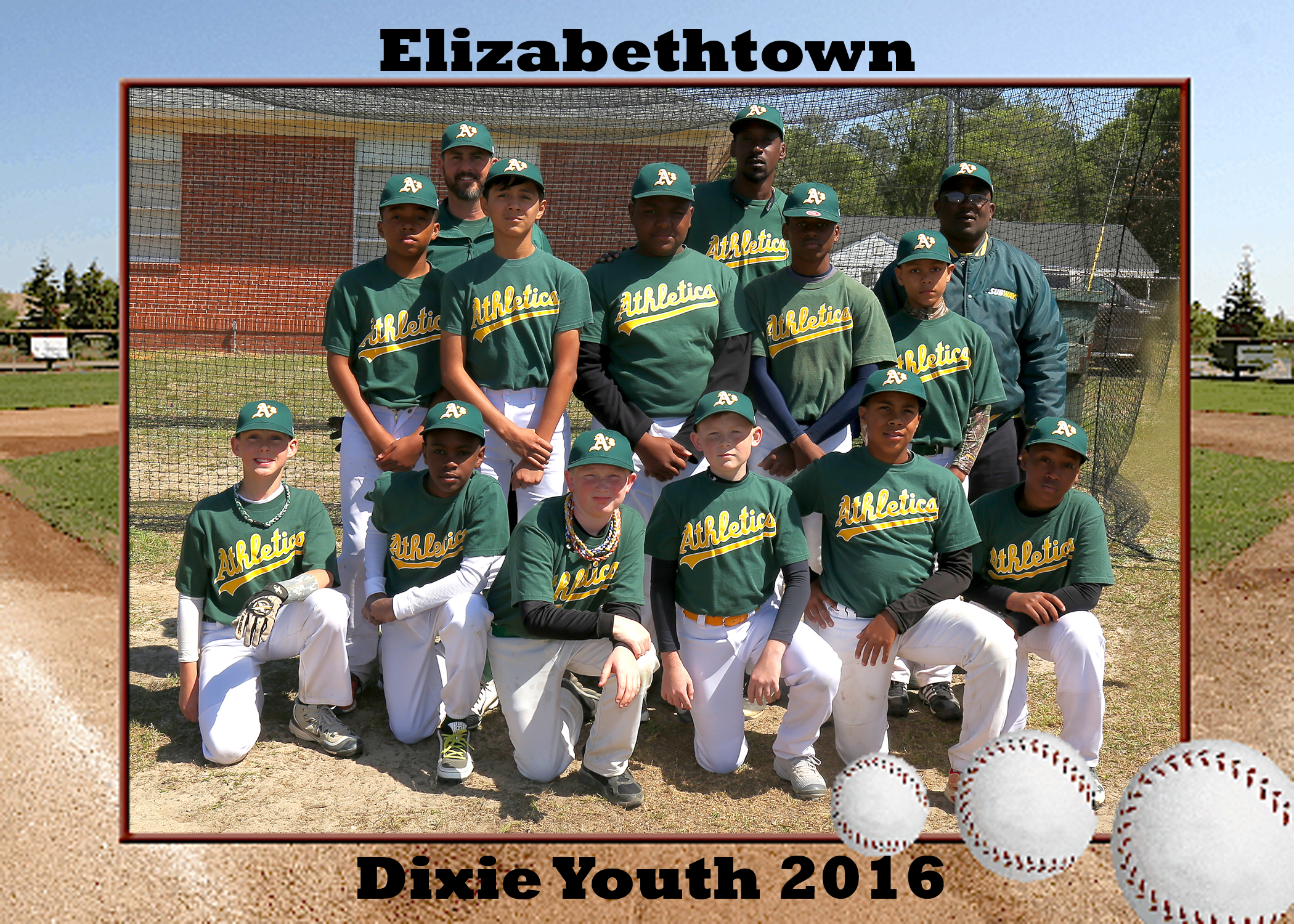 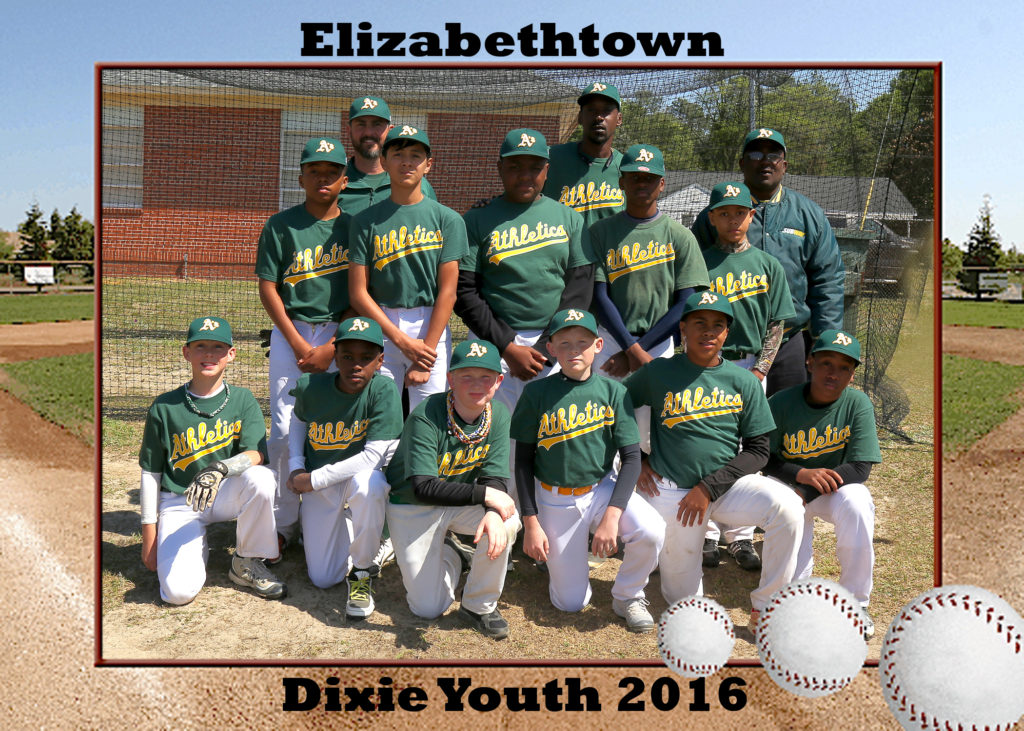 Makhi Cromartie knocked in Elijah Crabtree with the winning run, and Vic Campbell slugged a grand-slam home run as the Athletics rallied past the Astros 16-15 Saturday in the Elizabethtown Major League Tournament Championship Game at Leinwand Park.

The Athletics overcame a 12-3 Astro lead but still trailed 15-14 entering the bottom of the sixth inning. Anthony Cowan drew a lead-off walk, and Crabtree hammered a double to left-centerfield. Tyler Johnson’s fielder’s choice plated Cowan and tied the game.

Ty Mathis lined a single to centerfield that moved Crabtree to third. Campbell’s fielder’s choice loaded the bases, before Cromartie walloped a drive over the rightfielder’s head that brought home Crabtree and ended the game.

Johnson walked in the Athletic first inning, and Mathis reached base on an error. Campbell laced a single to centerfield that scored Johnson, but Astro centerfielder Ayden Piland threw out a runner at the plate to keep the margin at 1-0.

Jeremiah Jones was hit by a pitch in the Astro third, and Piland beat out a bunt single. Garrett Melvin raked a double down the leftfield line that scored Jones. Raymond Autry ripped a single to left that drove in Piland and Melvin. The ball skipped past the fielder, and Autry galloped home to put the Astros up 4-1.

The Athletics responded with 2 runs in the home third. Crabtree reached base on a fielder’s choice, and Mathis yanked a single to leftfield. Campbell pounded another single to right-centerfield that scored Crabtree, and Mathis scampered home on a wild pitch to trim the margin to 4-3.

Hunter Lockamy led off the Astro fourth with a single to left, and Piland slapped a double inside the leftfield line. Melvin beat out an infield hit that scored Lockamy, and Autry was hit by a pitch to load the bases.

Tyler Hill smashed a double to right-centerfield that cleaned the bases. Hill stole third base and dashed home when the throw went into leftfield to stretch the Astro lead to 9-3.

Walks to Hoytt Register, Cowan and Crabtree loaded the bases in the Athletics fourth inning, before Register sprinted home on a wild pitch to whittle the lead to 9-4.

Piland clobbered another double to begin the Astro fifth inning and raced home on  a pair of wild pitches. Autry and K. J. Brown drew walks, and Kory Smith knocked in Autry with a single to rightfield. An error on the play scored Brown and grew the lead to 12-4.

The Athletics sent 15 batters to the plate and scored ten runs in the home half of the fifth. Mathis and Campbell reached base on errors, and Mathis stole third and scored when the throw went into left field. Campbell dashed home on a wild pitch.

Cromartie walked and scored on a wild pitch. Destin Montgomery, Andrew Horne and Cowan drew walks to load the bases. Crabtree was hit by a pitch that forced home Montgomery. Mathis walked to force home Horne, before Campbell crushed the grand-slam homer over the leftfield fence.

Cromartie walked, moved up on a wild pitch and raced home when Montgomery smacked a single to centerfield to push the Athletic lead to 14-12.

Back came the Astros in the top of the sixth as Nathan Howell and Lockamy drew walks. Piland raked a single to rightfield that scored Howell, and Melvin beat out an infield hit that plated Lockamy with the tying run. Autry launched a towering sacrifice fly to the leftfield fence that scored Piland for a 15-14 Astro lead.

Campbell batted 3-5 with a home run, 6 runs batted in and 2 runs scored to lead the Athletic hitters. Mathis finished 2-4 at the plate with an rbi and 3 runs scored. Crabtree swatted a double, scored 3 runs and drove in one.

Piland and Melvin both batted 4-5 as the Astros outhit the Athletics 17-8, but 13 walks proved too much to overcome. Piland clubbed 2 doubles, scored 4 runs and drove in one. Melvin bashed a double, scored 2 runs and drove in three.

Autry finished a perfect 2-2 at the plate with 3 rbi’s and 3 runs scored. Hill pounded the 3-run double, batted 2-5 and scored a run. Smith was 2-4 with an rbi. Teammates Zarmar Lewis, Howell, and Lockamy added one hit each. Lockamy scored twice, and Howell, Jones and Brown scored one run each.

Autry pitched the first 4 innings for the Astros and struck out 8 batters. Brown struck out one in his third of an inning, and Piland struck out 2 in his inning of work.