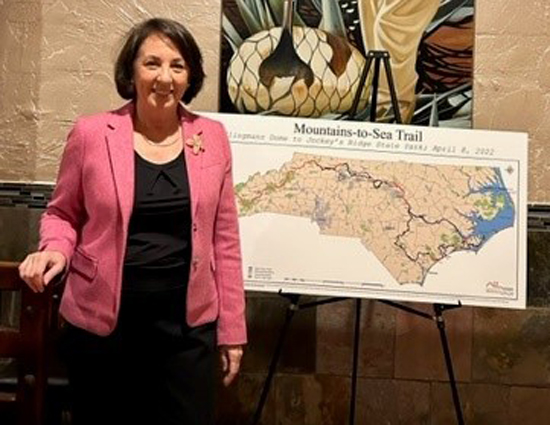 The Elizabethtown Kiwanis Club heard about two trail bridges planned for Bladen County as part of the Mountains-To-Sea Trail across the state and also were updated about the scholarship applications during it monthly meeting held Tuesday, Jan. 17 at San Jose’s Restaurant in Elizabethtown.

Mountains-To-Sea Trail representative Sherri Seagroves discussed updates about the trail and trail-related events. She told club members that the Mountain-To-Sea Trail is a 45-year-old hiking trail that spans 1,175 miles across North Carolina, including 39 miles that traverse through Bladen County. The Friends of the MST group is using a portion of its funds to complete two trail bridges in Bladen County. The first bridge was completed last month near the large parking lot at Jones Lake State Park. The second bridge will begin construction later this year.

Seagroves also shared that 2023 has been designated by the North Carolina legislature as Year of the Trail. Festivals and celebrations are planned across the state to encourage people to get out and enjoy the trails. Elizabethtown will kick off the first of 11 festivals Feb. 17-18. The festival will start in downtown Elizabethtown and move to White Lake in the late afternoon, Seagroves said. The festival will feature vendors, guided hikes, music and food.

To find out more about the state festivals, visit https://www.greattrailsnc.com

Club President Dr. Lisa Bryan told members that the Elizabethtown Kiwanis Scholarship applications will be distributed by the end of January to all the schools in Bladen County. Four scholarships are awarded each year to Bladen County high school seniors in May of each year. A grant from the Carolina Kiwanis foundation was applied for in early January which could provide a grant to the club for up to 50% of the amount awarded each year. This would provide an opportunity to give larger scholarships or more scholarships.

After opening with the pledge and prayer, Bryan said the district mid-year conference will be in Wilmington on Feb. 10-11. The conference is way to learn more about Kiwanis while networking with other clubs.