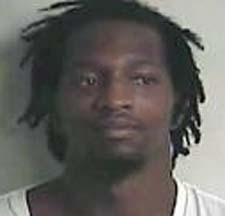 Saquon Reginald Covington plead guilty to two felony firearm charges Monday in Bladen County Superior Court under an agreement with the state and was sentenced to between six and 17 months in custody.

Covington, 27, of Elizabethtown, plead guilty to felony possession of a stolen firearm and felony carrying a concealed gun. He also has several drug related charges pending, which, according to the District Attorney’s office, will be addressed once his current sentence is complete.

According to the District Attorney’s office, the first incident occurred June 2, 2015, when the vehicle that Covington was driving was pulled over in Elizabethtown for violating the town’s noise ordinance. Once stopped, an officer from the Elizabethtown Police Department observed an open container of alcohol and asked Covington to step out of the vehicle. During a subsequent search of the vehicle, a handgun was located under the driver’s seat. A trace on the firearm discovered that the weapon had previously been reported stolen.

The second offense happened June 10, 2015, when law enforcement officers encountered Covington in Elizabethtown and attempted to serve him with an outstanding warrant. As he was being taken into custody, officers again discovered Covington carrying a concealed handgun. It was a different handgun than the one found about a week earler. The handgun was located in the pocket of Covington’s pants.