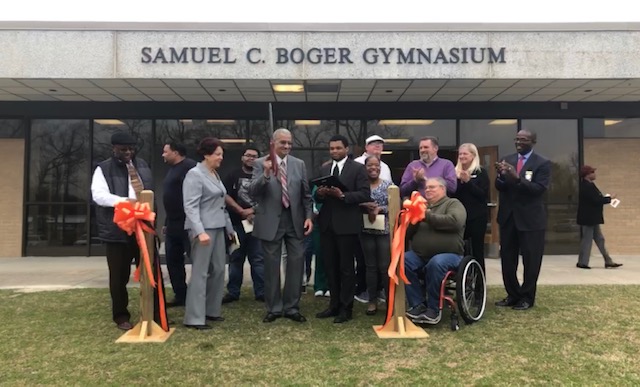 Many were in attendance at the Elizabethtown Middle School on Wednesday afternoon to honor Coach Samuel C. Boger. He dedicated his career to Bladen County Schools, and his personal life to helping others, according to Dr. Robert Taylor, Bladen County Schools Superintendent.

In February, 2019, Mr. Donald Wayne and Mr. James Reaves appeared before the Board of Education and submitted the paperwork necessary for naming a facility.

Their desire was to see the Elizabethtown Middle School gym named to honor Coach Samuel C. Boger, a well-respected basketball coach at East Bladen High School in the 1970’s and 1980’s. As they spoke of the many years Coach Boger spent mentoring Bladen County students, Board Members who were familiar with Mr. Boger echoed their sentiments, according to the program of the day’s event.

The original request form stated, “As a solid role model, Mr. Samuel Boger served our schools and community with passion and commitment. He is most deserving of the honor of this name to be on the Elizabethtown Middle School Gymnasium.

The decision to grant permission for the facility naming was approved. Now, the Elizabethtown Middle School bears tribute to the honorable coach in letters; Samuel C. Boger Gymnasium, standing tall in text across the building can be seen from the roadway.

As the request became a reality many celebrated the occasion. Bladen County Board of Education members Roger Carroll, Gary Rhoda and Alan West along with Coach Patti Evers, former players Donald Wayne, John Inman, and Coach Bogers’ wife Mrs. Sam (Bernice) Boger all stood with high praises for the Man of the Hour.

Wayne said, “My best friend, James Reaves and I always sit around and talk about old times and we always talk about Coach Boger and what an impact he had on us, 30 some-odd years later, we are still sitting around talking about him.” Wayne added, “He did something pretty good. He looked out for the students and was committed to our community, much appreciated.”

“Coach Boger was probably one of the most instrumental coaches in my life,” Inman stated.

“He loved his players,” Rhoda said.

Coach Evers referred to Coach Boger as a legend. One of Coach Boger’s favorite quotes is, “Winners never quit, and quitters never win,” according to Coach Evers.

She said, “I’m going to hang that in my locker room tomorrow.”

As Coach Boger graciously took the platform, he shared the spotlight by thanking others. He bragged on his players, managers, administration, fellow coaches and friends. There was not a uniform lost, players and managers swept the floors and took care of what they were given, Coach Boger explained. He described the memories and named community members who helped him and his teams.

Before heading outside to cut the ribbon in front of the newly named gym, Coach Boger was presented with a plaque in appreciation for his service to Bladen County Schools by Dr. Taylor.

Coach Boger’s son, Calvin, who was in attendance said he had the opportunity to play in 1987-1988 with his dad as the coach. He said it was interesting playing for his dad, and he was able to attend the state playoffs as a trainer helping his father.

Now, Coach Boger is enjoying life and retirement, according to his son. Mrs. Boger said she is trying to convince Coach Boger to move away from Bladen County, but she admitted, she has not succeeded in the task yet.

No matter where Coach Boger travels he will be remembered as one of Bladen County most beloved coaches with his name mounted in front of the Elizabethtown Middle School Gymnasium to be seen from U.S. Highway 701 in Elizabethtown.

Clips of video from the celebration: