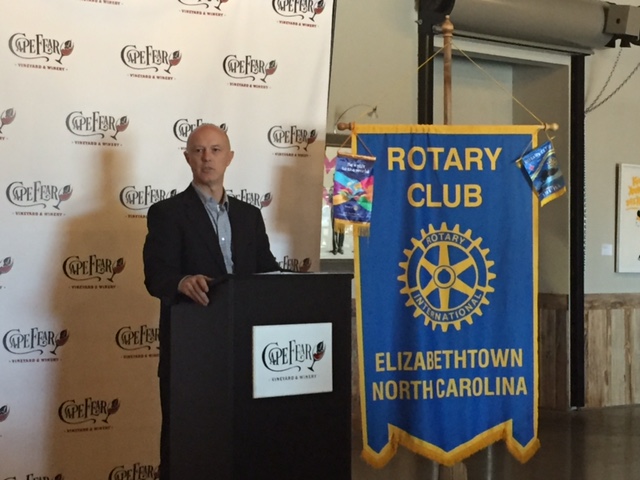 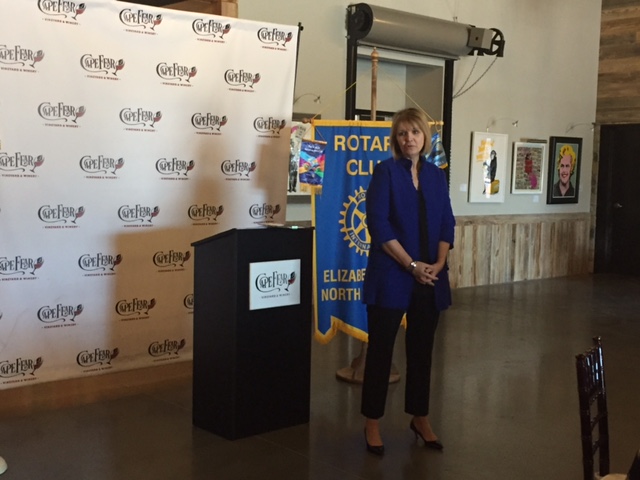 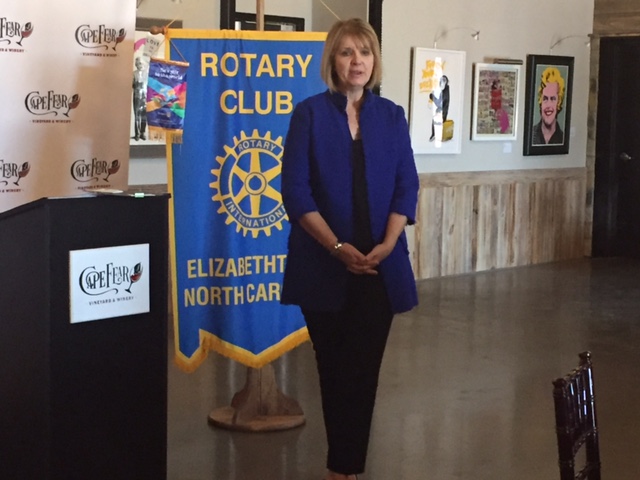 Kate Alice Dunaway of Emereau: Bladen spoke to the Elizabethtown Rotary Club on Wednesday during their monthly luncheon held at Cape Fear Vineyard and Winery. She has experienced as an educator and began teaching in Georgia and then continued her career in New Mexico. Dunaway taught in an independent school in Albuquerque and said that experience is where she learned what difference was between the traditional public schools and independent or Charter schools.

When she moved to North Carolina, Dunaway said she decided she wanted to focus on school choice and providing opportunities for all young children.

She shared the mission statement with the group. “At Emereau, we illuminate to embark; we investigate to discover; we innovate to transform; we cultivate to sustain; we celebrate to thrive – realizing the potential within us – we graduate. E=i(3)c(2)g!”  Dunaway added that the mission statement shows the commitment of the school to educating students.

She discussed the nature and creation of Charter Schools in North Carolina. Dunaway said Charter schools were authorized by the General Assembly in 1996. Initially the state set a cap of about 100 Charter schools but that cap was lifted a few years ago.

In  the case of Emereau:Bladen, the application was presented in January 2015. The Board of Directors for the school went through a process of external and internal interviews, said Dunaway. The State Board of Education approved the application in August for the school to open for the 2017-18 academic year. Dunaway said that every month the board meets with the SBE in Raleigh for training and to answer questions about the school’s progress towards being ready to open.

Emereau:Bladen will open as a K-6 school and will be adding one grade per year through grade 12. Dunaway said currently, the school is accepting applications for enrollment and currently 150 students have enrolled. The open enrollment process for the school ends on the last Friday of February said Dunaway.

The school will be located on Airport Road near Elizabethtown. Dunaway said a building is being constructed to accommodate k-6 and support later growth with the addition of one grade per year.

“What I’m most excited about is the opportunity to provide a school of choice,” said Dunaway.

Emereau:Bladen will follow the North Carolina Standard Course of Study and utilize the Core Knowledge Curriculum and Maker Space program. The school will have a strong foreign language program that will teach Spanish. Dunaway said the students will take all fo the same state standardized tests that students in traditional public schools must take.

The school is actively recruiting for educators and Dunaway said they do not follow the state salary schedule which allows the school to be more competitive.

Dunaway said the school will also offer athletics to students beginning with the 7th grade and the types of sports offered will be at the discretion of the school leader. Dunaway did say that football is not included. She said Emereau:Bladen’s athletics squads can play against other charter schools, independent schools and faith based schools.

When asked about transportation, Dunaway said the state law reads there is no barrier to access. Emereau:Bladen does have funding available for transportation. She said the logistics of the pick-up points is still being determined.

When asked about lunches, Dunaway the school will not have a cafeteria due to the costs. Dunaway said the school does have the option to participate in free and reduced lunch and funding provided for children to have what they need. She noted that students will pack their lunch.

Rotarian Eddie Madden, who is also an Emreau:Bladen board member, also said that about 350 students leave Bladen County each day to travel to attend school in neighboring counties. He said the hope is with the opening of Emereau:Bladen, those students will return to Bladen County.