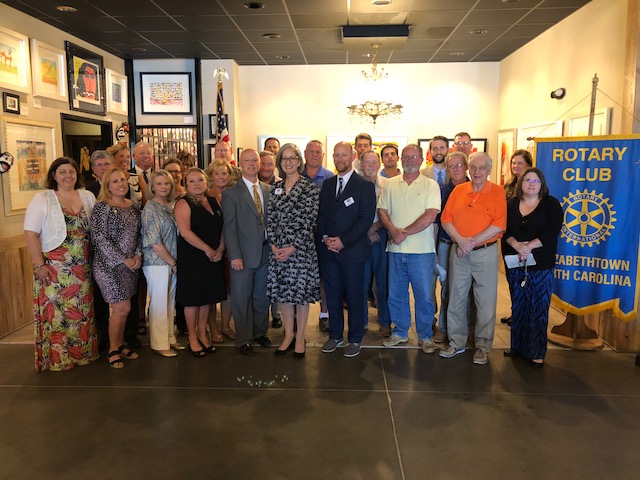 Lane and Knight both addressed the group about the activities of the USO of North Carolina. Lane briefly introduced Knight to the group. Knight recently returned from a tour of duty in Iraq and retired as a Command Sergeant Major on Monday.

“We have three busy centers serving over 12,000 service members a month and their families,” said Lane.

He noted there are three USO centers in the Fayetteville region. He said the Soldiers’ Support Center sees about 300 to 500 soldiers per day. Knight said the USO of North Carolina operates a center at the Fayetteville Airport and then Monday through Thursday a team cooks meals for the wounded warriors.

“Your support of the USO allows us to keep doing that,” said Knight. “While I was in Iraq it was too easy to pick up the phone or shoot an email to the USO and say ‘here is what the soldiers need. What can you do for us?’”

Knight said the USO would ship a container filled with the items the soldiers were requesting.

He said soldiers often ask him what its like to be part of the USO. Knight said his response is that it is “like winning every day.”

The Rotary Club also recognized the veterans who are members of the group.