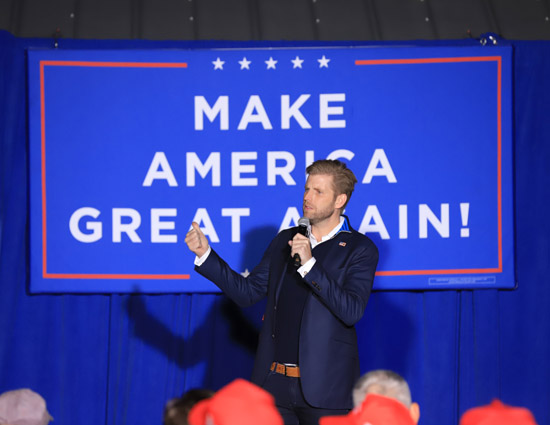 The son of President Donald Trump was in town to rally support for his father ahead of Tuesday’s general election. The event was free and open to the public.

Donald Trump, the Republican nominee, is running against Democrat nominee Joe Biden, who was vice president for eight years under President Barack Obama.

Alex Munroe, owner of Cape Fear Vineyard and Winery, explained the Trump camp contacted him earlier this week about hosting the event.

There were an estimated 350 people at the meet and greet.

“It was a perfect night!”

“I came to hear someone speak the truth. I’m tired of all these lies people tell,” Kevin Hollingsworth stated.

Zac Cline said he came because “I want Trump to win and I am tired of all the democrats lies. Trump is doing things no other President has ever done.

President Trump has rescheduled a rally in Fayetteville that was postponed Thursday because of inclement weather. The rally is set for Monday at 11 a.m. at the Fayetteville Regional Airport.

The Democrat nominee Joe Biden campaign has not scheduled an event in Bladen County.

Allen Brother’s Hunting Preserve hosted a similar event in August with Author Donald Trump, Jr. Read about it by clicking the link below.

View video from the event: