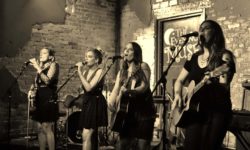 Named after a haunting Bob Dylan song, Farewell Angelina is an all-female country group with four powerhouse vocalists, dynamic songwriters and badass multi-instrumentalists. Their stellar blend of heart-stopping harmonies over blazing double violins and guitars has earned soaring praise across the board. Roughstock calls them a “Superstar Act… with Killer Songs.” Rolling Stone says, “Wickedly smart songwriting delivered with a healthy dash of sass… deft playing… into one sonic knockout punch.”

A band of longtime friends Nicole Witt, Andrea Young, Lisa Torres, and Lauren Lucas all met pursuing their dreams in Nashville, TN. Each had deeply respected and admired each other while they were building successful solo careers, touring and recording with top artists, and writing songs for some of Country Music’s biggest hit makers.

Farewell Angelina’s has gained a strong following in the past several years, with fans voting them a “Hot Seat” spot of the Taste of Country 2017 “RISERS” Program with over 20,000 votes. They’ve also been named among Rolling Stone’s “New Artists You Need To Know,” and Roughstock’s “Ones to Watch” with a tour schedule to prove it. Members have had songs recorded by artists ranging from George Strait to Lee Brice and their instrumental and vocal talents have graced and enhanced country stars such as Jason Aldean, Trace Adkins, Josh Thompson, Jana Kramer, Frankie Ballard, and Jerrod Niemann. Onstage, they’ve opened for Blake Shelton, Rascal Flatts, Dierks Bentley and a host of others.

Tickets: Individuals $25, Seniors (65+) and Military $22. Students $10, PrivilegesPlus members $20. Group discount rates of $20 each for groups of 10 or more when purchased in advance are available by contacting the box office. Tickets can be purchased any time on-line at www.carolinaciviccenter.com or in person and telephone noon-5:30 pm weekdays through the administrative offices on the theater’s 2nd Floor (use 4th Street entrance), or by calling the theater at 738-4339 Ext. 1.The Theater lobby box office opens for ticket sales one hour prior to a performance.