Fashion Show at Division on Aging 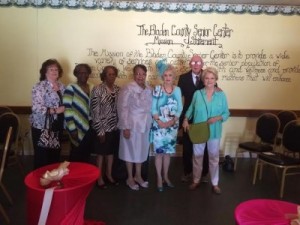 The Division On Aging hosted their second fashion show Monday, April 13th. With many smiling faces and excited seniors waiting to watch, Amy Ruffin, Senior Center Director, opened up the show by introducing the judges for the show.

Thomas Lee Ruffin and Joan Carrol Skipper helped with the hard decision of pronouncing the Division On Aging Fashion Show winner. Amy Ruffin, MC of the fashion show, described each contestants outfit and attire as they walked out and presented themselves to the crowd and judges. The contestants of the show were Allie Hopgood, Shirley Hough, Sue Kennedy, John Kenndey, Martha Walker, Gertrude Mckiver, and Margaret Ann Martin.

When the judges were asked to go back and discuss the winner of the show, they came back with an unexpected answer. One judge said, “All of you were dressed so wonderfully, it was a hard decision.” Instead of one winner of the show, Amy presented all the contestants with a medal. John Kennedy was presented with a vase of flowers for being the over all favorite.

John wore a, “Wedding Suit” as he calls it. Kennedy shared his story about how he has worn this suit in his own wedding and has worn it in many others as a best man. John says, “This suit has brought everyone good luck.” The seniors ended the show by having a few refreshment along with the jolly spirit left in the room.