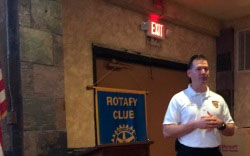 The Elizabethtown Rotary Club welcomed the town’s new Fire Chief, Nick West, Wednesday at their weekly meeting.  The new Chief, originally from the White Oak area in Bladen County went over his background, what the Fire Department has going on now, and what his goals are now for the department. West is an adoring husband of a wife, who is a pharmacist in Whiteville, and a proud father of a four year old son.

The Chief has his electrical license here in NC. After he worked as an electrician a while he decided he wanted to be in the fire fighting industry.  He started his fire fighting career in Fayetteville and his path has lead him to Elizabethtown now. Fire Fighter safety is one of his top priorities. The town and the station’s staff are working real hard on receiving grants to get new equipment. The department received a new fire truck recently and is currently in the process of building a new truck to meet their specific needs.

The town’s department has five paid employees.  The volunteers have received payment benefits this year through a grant. West is working on a system to allow the volunteers to continue receiving STIF funds. This has been a project his has been working on since he began his duties. “We have more volunteers now. I’m actually proud because here lately we have been turning four to five people out on each call.”, explained West.

The department will also be helping with more community service projects. They are planning on attending the Brown’s Creek Bike Trail this weekend to work on adding some trails. Another one of the department’s goal is to be more involved with the community. If they go out on a call the smoke detectors are going to be checked before the staff leaves the home. Safety tips will be explained to citizens willing to listen. West told everyone, “If you’re by the Fire Station, come out and hang out with us.”