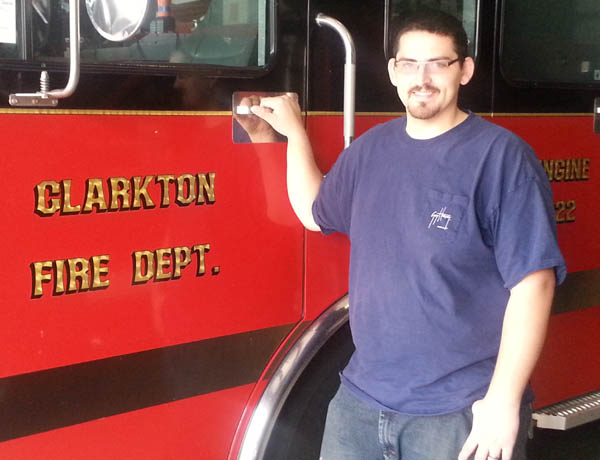 For now, he’s a lieutenant in the 28-member Clarkton Volunteer Fire Department. He was honored as the department’s 2014 Firefighter of the Year.

Sult joined the Tar Heel Volunteer Fire Department as soon as he got his driver’s license at age 16. He was with the Tar Heel department for a couple of years before moving to Clarkton.

“When I was in high school, there were a bunch of guys that I was friends with who were in the fire department,” Sult said. “I had a guy talk to me about joining the department. I joined the Tar Heel department when I got my driver’s license.”

He’s been answering calls and helping around fire departments ever since.

“I just like helping people,” Sult said, “getting out and doing things for other people.

“We don’t get paid for it. Whenever you can respond, you do,” Sult said. “One thing that really pays off is when you go to someone’s house and start talking to them about the department. They’ll ask about how much we get paid. We tell them it’s all volunteer. They thank you for what you do.”

Of course, part of being a first responder — whether paid or unpaid — means you’re often on scene in tragic circumstances, whether it’s a traffic fatality or someone watching their house destroyed by fire.

“The fatality calls or when kids are involved or an elderly person involved, those are the most difficult,” Sult said. “It’s the same stuff that would bother anyone. The bad memories always stick out.”

One call Sult remembers came in June 2013 when three women were killed in a head-on collision on Burney Ford Road just outside of Clarkton. Sult was the second responder on scene.

However, there are times when you’re part of a rescue that you’ll always remember. In November, Sult was on scene at a house fire in the Rico community and snapped a picture of Bladenboro firefighter Joey Coleman using an oxygen mask to revive a puppy who had been trapped in the fire.

Whether it’s as a profession or as a volunteer, firefighting seems likely to be a part of Sult’s life for many years to come.

“Family, work and firefighting, that’s me” said Sult, who is married to Whitney Burney Sult. The couple have two children.

In fact, Sult has been known to respond to a call with his kids in his vehicle. While he can’t get actively involved in emergency situations during those times, he wants to be there to help in any way possible, such as directing traffic or supporting other firefighters.