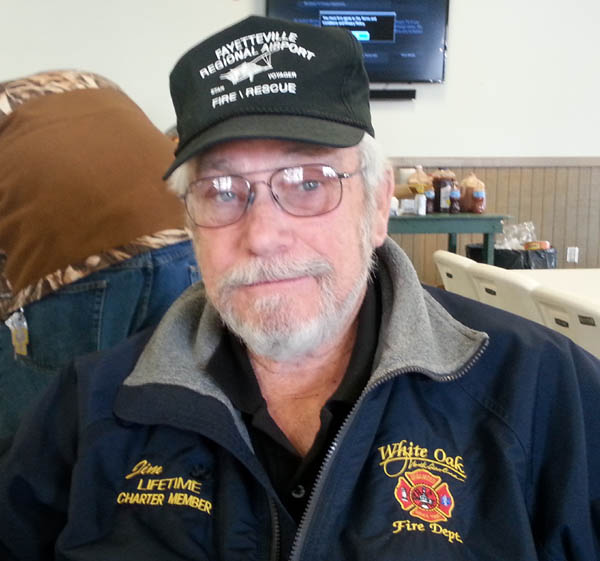 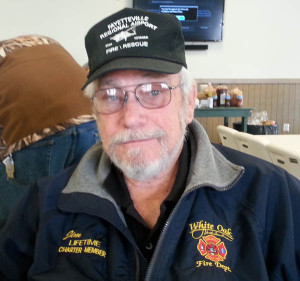 Jim Knotts learned early in life the importance of firefighters. It was a lesson that has stuck.

So much so that Knotts has spent a lifetime battling blazes and promoting fire departments. He was among the co-founders of the White Oak Volunteer Fire Department in the early 1980s. He’s still with the department, serving as a captain. Before that, Knotts was in the U.S. Navy for 20 years, spending time with a firefighting unit, and also worked with the Fayetteville Fire Department.

“I started firefighting when I was 18 years old,” Knotts said. “I went to my first firefighting school in 1960 in the Navy and pursued that the whole time I was in the Navy. I also volunteered at a station in Virginia Beach, Virginia, for about six years.”

When Knotts finally settled in White Oak in 1980, he noticed the community didn’t have a fire department. He asked around, but didn’t find much support for having a volunteer fire department in such a rural area of Bladen County.

That’s when a massive woods fire broke out in and around the recently opened Camp Bowers, the 1,400 acre Boy Scout facility located about four miles from the White Oak Post Office off N.C. 53. More woods fires broke out near Dowd Dairy Road and Turnbull Creek State Forest. N.C. Forestry Service personnel, and local and area firefighters, fought against the fast-moving fire that skipped over roads and left much of White Oak in a thick cloud of smoke for days. Helicopters were brought in to dump large buckets of water onto fires.

“I was in South Carolina at a family gathering at the time,” Knotts said. “My wife called and told me I needed to come home, that a fire was coming up the street. When I got to Florence, South Carolina, on Interstate 95, I could see the smoke. That’s how big it was. This part of the world looked like it was on fire that weekend.”

It didn’t take long before many in the community saw the need for a fire department.

“When that fire went through, Andy McKoy, who was the park ranger at the time, and I brought it up at the next Ruritan Club meeting, and they decided we needed to look into it,” Knotts said.

In 1983, the White Oak Volunteer Fire Department began with no money and no equipment, but a desire to bring fire protection to the community. Members had to buy their own equipment, which costs between $600 to $700.

“Roscoe Sessoms was a big backbone in where we’re at today,” Knotts said. “Roscoe didn’t believe in buying nothing that you didn’t have to have. I was a welder. Roscoe was a good engineer. So, between the two of us, we manged to keep things going until we got enough money to buy a good fire truck.”

“The station’s first truck was one bought from the White Lake Fire Department by Dr. Creed”, Knotts said. A bit later, Danny Sholar donated a Dodge truck and it was reconfigured into a tanker. The department also got another truck that was turned into a brush truck.

In the mid- to late-80s, the department finally bought its first commercial fire truck, a 1963 Ford, from a dealer in Lenoir, Knotts said. “Some of the members in the community pooled their money together and loaned the department the money to buy the truck so we wouldn’t have to get a commercial loan,” Knotts said. “We got that paid back, then bought another truck. It’s been a lot of hard work and dedication.”

The department answers about 50 to 60 calls per year, mostly involving vehicle accidents.

“We’re very fortunate that we don’t have a lot fire calls,” Knotts said.

But, because of people such as Jim Knotts, the White Oak community is prepared to answer a fire call if needed.