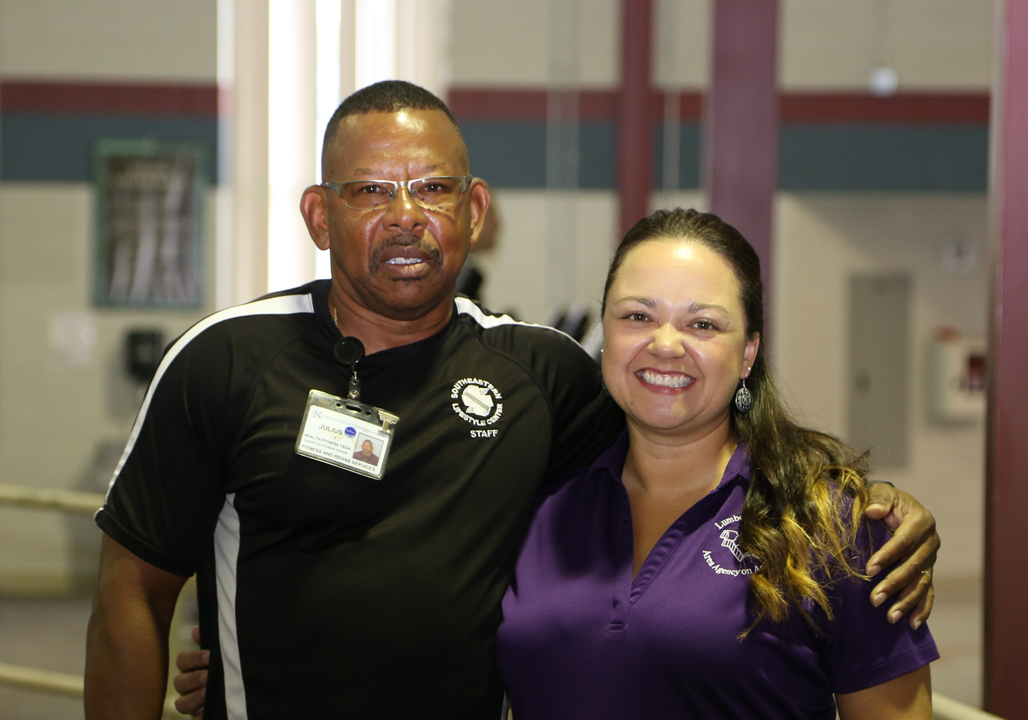 Julius Meekins, a fitness technician for Southeastern Health’s Southeastern Lifestyle Center for Fitness in Lumberton, says he has always been motivated by fitness. After taking home the bronze medal in the 100-meter dash at the National Senior Games in June, he’s hoping he also motivates other seniors to be active, and maybe even compete.

“When I got out there and saw the ‘real’ seniors competing, that made me motivated, too,” he said.

This was Meekins’ first National Senior Games, which are held every other year. Last year was his first time participating in the local Lumber River Senior Games and he ventured to the state level of the North Carolina Senior Games in Raleigh, which qualified him for nationals by placing first in the 100-yard dash and the standing long jump. The national games were held in Albuquerque, N.M. on Jun 16-18.

“On Father’s Day, my daughter was at work texting me, ‘Good luck and don’t get hurt,’” he said.

Meekins also credits Aging Specialist Ursula Selles, who reached out to him and encouraged him to compete. Selles is with the Lumber River Council of Governments’ (LRCOG) Area Agency on Aging. LRCOG coordinates the regional senior games, which includes heritage, visual, literary and performing arts competitions, each year in April/May.

Residents of Robeson, Hoke and Bladen Counties who are at least 50 years old can participate. Winners move on to the state competition.

Meekins’ decision to compete might not have come as a surprise to those who know him. While Meekins has been a fitness technician at Southeastern Lifestyle Center for Fitness for the last four years, he also retired from a 32-year career as a middle school health and physical education teacher in Robeson County. Before that, the 1978 Pembroke High School graduate was a high school and collegiate athletic standout. He still holds the indoor track and field record for the long jump at The University of North Carolina, which he set in 1982.

“I just appreciate the opportunity I’ve been given,” Meekins said. “Not just in going to compete, but through life. I’ve been healthy, and I’ve been motivated by lots of fine people in Robeson County. If it gives me the chance to motivate people behind me, that’s all I ask.”

To get ready for his return to competition, Meekins trained twice a week in the fitness center pool, and even fit in some training alongside the water aerobics class he teaches on Tuesday nights, which he calls his Navy Seals. Since his long jump career and aging have contributed to some knee and ankle deterioration, the pool training made sense.

“You train in water to increase your range of motion,” Meekins said. “I recommend it to all the seniors.”

Meekins’ other message for his fellow seniors is he hopes to see more of them get involved in Senior Games. The Lumber River Senior Games is an “open games” format, which allows seniors from other counties to join and participate.

“Don’t get involved for the competition,” he said. “Except for competing against yourself. It keeps you moving. And you build a network of camaraderie more important than a medal. The friendship and memories of competition last forever.”

As for the next games, Meekins is still deciding if he will keep competing. He said he loves “flying under the radar” and now he feels he has a target on his back.

“It was so close, I honestly thought I had the fourth-place finish, so seeing my name and the number three beside it was a good conclusion,” he said. “Then once you sit back and reflect over your previous performance, you always find something you could improve on.”