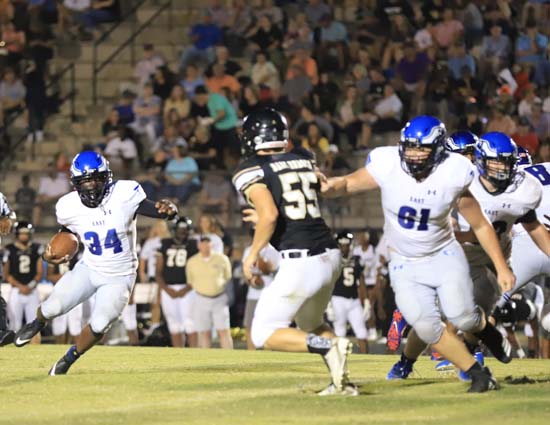 The Dark Horses’ first possession began at the Eagle 43-yard line after senior J’daques Wallace’s 91-yard kickoff return for an apparent touchdown was nullified by an illegal block. Clinton moved to the East 12-yard line, before Eagle junior Josh Hayes pounced on a Dark Horse fumble to end the threat.

After an East Bladen punt, Clinton regained possession at the Eagle 26-yard line. Five plays later Wallace dashed 6 yards for a touchdown. Payson King booted the extra point for a 7-0 lead with 5:59 on the first period clock. 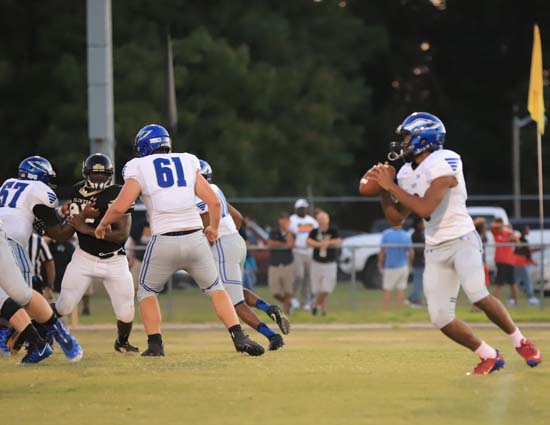 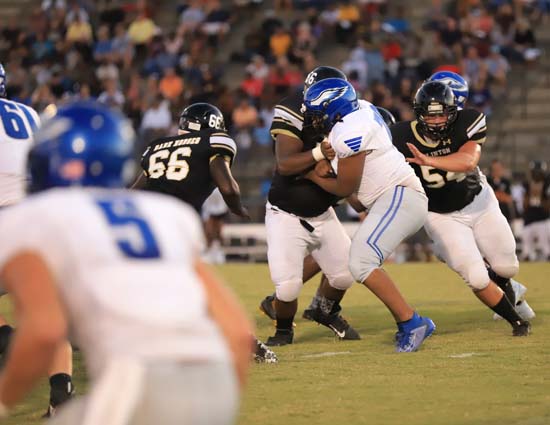 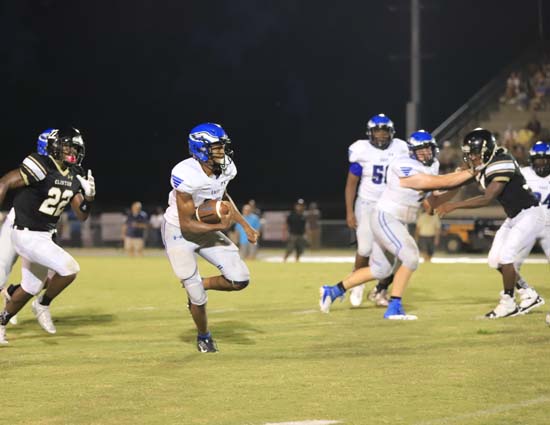 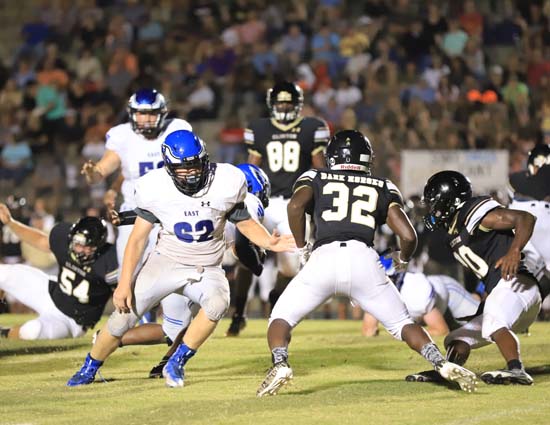 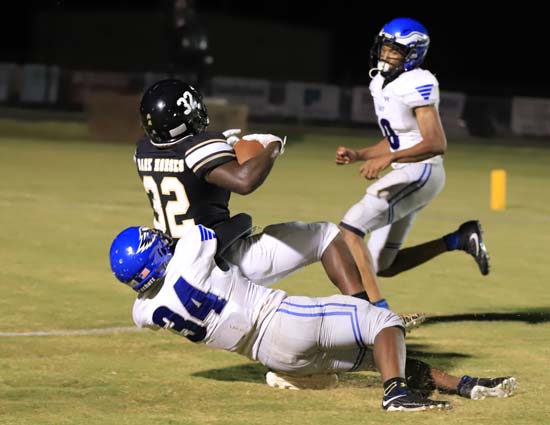 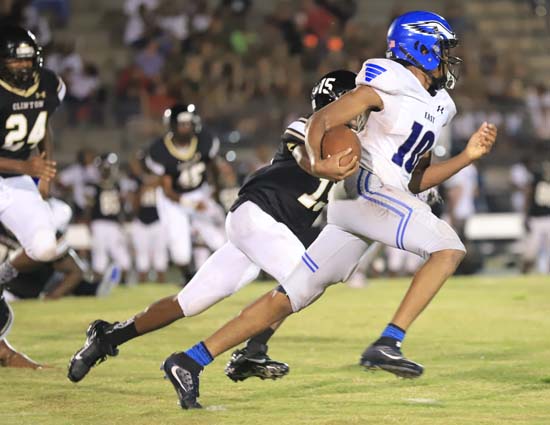 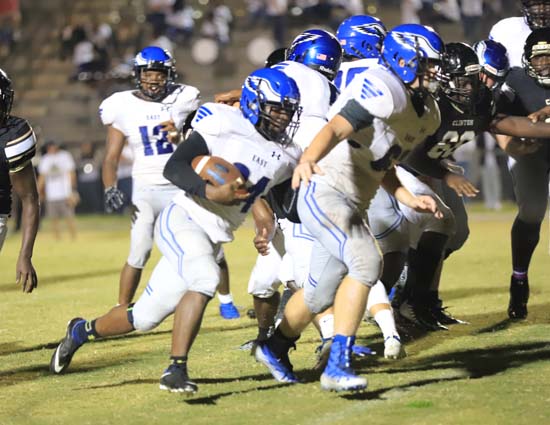 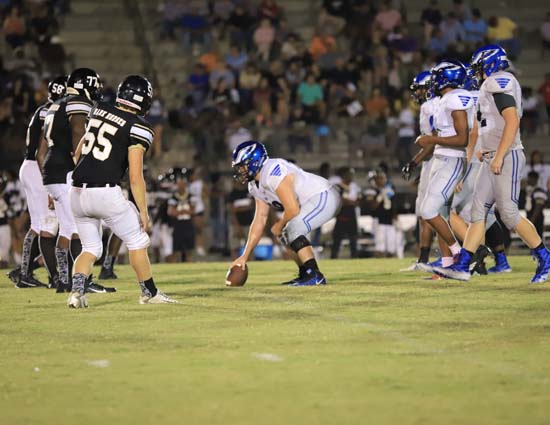 The Dark Horses covered 53 yards in 6 plays keyed by a 21-yard run by Wallace. King, the quarterback, kept the ball from 2 yards out for the TD then tacked on the conversion for a 14-0 lead.

An Eagle fumble set the Dark Horses up at the East Bladen 31-yard line. However, Eagle senior Lawson Hester intercepted a King pass in the end zone on the next play.

The Eagles responded with a 75-yard drive in 10 plays. Junior Rasean McKoy galloped 27 yards to start the march. On fourth down at the Dark Horse 49, McKoy took a direct snap out of punt formation and bolted 18 yards to the Clinton 31.

Senior ZaQuis Leach ripped off runs of 11 and 5 yards before an 8-yard carry by McKoy put East on the 5-yard line. However a fumble on the next play stopped the threat. “The fake punt had given us some momentum, but that fumble stopped us,” said Eagle Coach Robby Priest.

The fumble recovery ignited a 95-yard, 11-play scoring drive for the Dark Horses. A 21-yard run by Wallace and a 27-yard run by Davion Smith keyed the march. King carried 2 yards for the TD then tossed a conversion pass to Jatiyuhn Wilson for a 22-0 halftime lead.

The Eagles were stopped on downs on their initial possession of the second half, and the Dark Horses covered 39 yards in 4 plays. A 19-yard run by Jaheim Faison with a face mask penalty tacked on set up Wallace’s 4-yard TD run. King’s conversion kick pushed the lead to 29-0.

East Bladen’s third lost fumble of the game gave Clinton the ball at the Eagle 24-yard line. Faison circled left end on the next play for the touchdown. King booted the point for a 36-0 lead.

Leach’s 24-yard kickoff return started the next Eagle possession at their 41-yard line. McKoy sprinted 34 yards to get the drive started, and Leach bolted 11 yards then banged through the line on a 6-yard touchdown run. Hester ran the conversion to cut the margin to 36-8 with 3:10 left in the quarter.

Clinton responded with an 80-yard drive in 6 plays. Junior Davion Smith’s 46-yard gain highlighted the drive. Smith reversed his field and darted 19 yards for the touchdown. King converted for a 43-8 lead at the quarter break.

The Eagles ground out an 80-yard, 15-play scoring drive. A 12-yard run by Hester and a 13-yard keeper by senior quarterback Tayshaun Berkeley began the drive. Senior Kasey Price bolted 11 yards, and senior Desylas McKoy dashed 13 yards. Price banged into the end zone from 3 yards out for the touchdown, and Hester ran the conversion for the final 43-16 margin.

“Whatever could go wrong, went wrong,” said Priest. “We need the week off.” East Bladen has an open date next week before opening Three Rivers Conference play at Whiteville on September 13.

Smith ran for 103 yards and a touchdown on 7 carries to lead the Clinton attack. Wallace followed with 88 yards and 2 TD’s on 9 attempts. Faison finished with 54 yards on 4 carries.